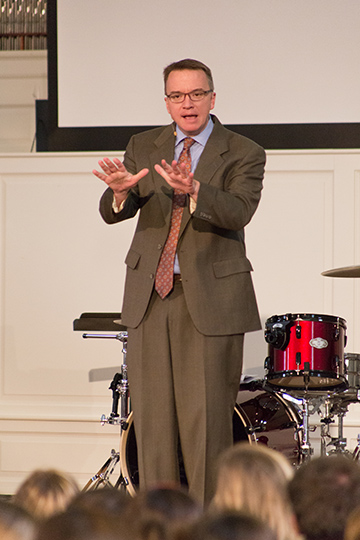 “Not only is the church in America dying, but that’s actually good news,” Cook said as he presented the 2017 Auchmuty Lecture, hosted by Samford’s Center for Congregational Resources. Cook’s view is that Christians should not fight the death of the church in its current form, but welcome it as a chance for resurrection.

Cook reviewed the grim statistics that are well known to church leaders. The story of the church in the U.S. since World War II is a story of what sociologists call The Great Decline, marked by steep and accelerating disengagement from religion in general and institutions in particular. Ninety percent of surviving churches were once larger, Cook said. Of the 10 percent still growing, almost all are simply absorbing members from churches in steeper decline. The growing percentage of Americans who do not associate with religion is “one of the most dramatic shifts in religious adherence in the history of the United states, and perhaps in the history of Christianity itself,” Cook said.

The pastor described the church formerly known as Gaston Avenue Baptist Church, the second-oldest church in Dallas and “a megachurch before the term was even invented.” During the postwar boom, it became one of largest churches in U.S. and the “mother church of missionaries” with thousands of members. By the late 1980s, it had only 500 members. The church renamed itself Gaston Oaks Baptist Church, found a new home in a renovated office building and hoped these changes would allow it to swim against the powerful cultural currents. “Years later,” Cook said, “all that hope hadn’t amounted to very much.”

Cook reminded his audience of the biblical road to Emmaus on which the resurrected Jesus appeared to disciples who lacked the imagination to recognize him immediately. “They had been looking for, up until this moment, an ordinary hero,” Cook said. “What God was offering them instead was the crucified and resurrected Christ.”

“Death changes things,” Cook explained, “and not just for Jesus, not just for those two men on the road to Emmaus. You and I, right now, in the early years of the 21st century, are in an Emmaus road experience. If the church is Jesus’ body, then maybe what we are supposed to come to terms with is that the Jesus we knew before has died. But as Christians, not only should we not be afraid of that, we should embrace it, celebrate it, because Jesus takes death and turns it on its ear. He makes it a tool for his own purposes. Death is now the way we get to new life.”

Cook asked, “What needs to die in the church for resurrection to occur in coming years?”

He noted that Jesus was tempted by “comfort, glory and power” in the wilderness but rejected those temptations outright. “Maybe that’s what we have to do in the 21st century of the Church,” Cook said.

Cook described a culture in which people evaluate churches in terms of musical preference, entertainment value of sermons, and other superficial factors as if “trying on clothes at the mall.”

When Christians fail to consider first which church will make them more like Jesus, Cook said, the church becomes “filled with people who think God exists to make them happy. If we’re going to be the church God needs us to be in the coming days, the consumer church must die so that the church’s ability to meet peoples’ deep needs might live.

“The impressive church must die so that a mustard seed methodology might live,” Cook added. “If we define the church’s success by how many people are in the building on Sunday, we might have a number of really large churches, but we won’t have people who know how to be the church the other six days.”

Cook lamented that a focus on political power has alienated many of those who no longer associate with religion.

“The primary view that outsiders have of Christians is that the main thing that we are interested in is trying to force people to adhere to our values by voting in candidates who will legislate our morality and make it legal, enforceable,” he said. “The church of secular political power must die so that Kingdom vision might live.”

“Remember that we follow a man whose biggest political moment involved riding into town on a donkey before he was crucified seven days later between two thieves,” Cook said. “This is not exactly a winning strategy for political prominence. Jesus was never interested in cultivating political power.” Rather, Cook said, Jesus sought to build the Kingdom, “not from above, but from below.”

If Christians of any political persuasion believe that elections will usher in the Kingdom, Cook said, “then we have a fundamental misunderstanding of what God’s Kingdom looks like.” But what does God’s Kingdom look like, and how can a dying Church help build it?

The aging Dallas megachurch did not stop its decline by simply clinging to its past. The relocated church found that its new neighbors included many immigrants and refugees seeking community and services. Gaston Oaks Baptist church welcomed those people and created the thriving Gaston Christian Center ministry that is now home to six different congregations, a health center and nonprofit ministries.

Passing north Dallas on the road to Emmaus, Cook highlighted the moment when the men on the road recognize Jesus. “When they extend hospitality towards him, when they break bread with him, the disciples’ eyes are opened and they begin to see.”

“The world is changing and the church is dying, Cook concluded. “We can be scared and we can fight it and we can make it all about us and what we want and do everything in our power to keep it from happening, or we can follow Jesus and die. That is the answer—to follow Jesus and die—as long as we remember that when we follow Jesus, death isn’t the end of the story, it’s just a tool that God uses to usher us into new life.”