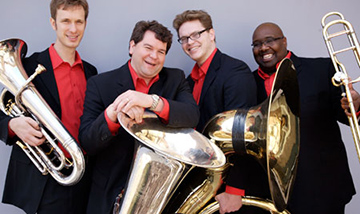 The Davis Series celebrates the talent of guest artists from around the world, providing master classes for School of the Arts students and entertainment for the Birmingham community.

Sotto Voce Tuba Quartet began performing in 1996 when its original members were attending University of Wisconsin. The ensemble gained recognition at highly regarded music competitions including the Fuschoff and the New York Concert Artists’ Guild and began touring nationally and internationally.

Demondrae Thurman, professor in Samford’s School of the Arts, is one of the founding members and says, “I am thrilled to have Sotto Voce Tuba Quartet be a part of the Davis Series ,which is known to bring the finest artists from across the world to the Birmingham area.”

This will be the ensemble’s first performance at Samford but it has made appearances throughout the southeast in recent years. Thurman keeps a busy schedule performing with the Sotto Voce Quartet, as well as guest performing and conducting.

The low brass chamber music ensemble is composed of two euphonium and two tuba virtuosos. According to Thurman, “by the end of the concert, our audience will see the excellence and diversity in our ensemble.”

The quartet highlights the versatility of these instruments, performing a variety of works arranged for its unique membership. This concert will feature works by composer Anthony Plog and ensemble member Mike Forbes. Other members include Mark Carlson and Derek Fenstermacher who will be playing for Nat McIntosh.

Having attained an international reputation for serious chamber music, their performances have been showcased on Performance Today and their recordings are often played on Classical Music NPR stations throughout the U.S.

Each year, Davis Architects provides generous support for this music series.  These concerts enrich the lives of students, faculty and Birmingham alike.  The School of the Arts appreciates the support of all of our patrons.