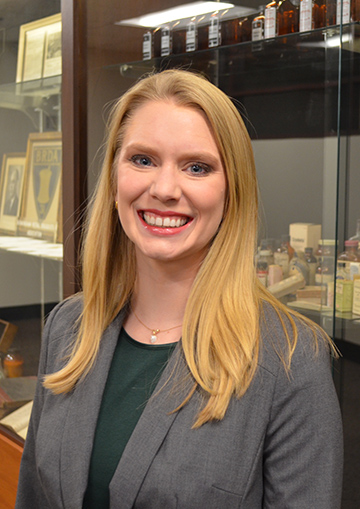 The scholarship recognizes Leatherwood’s exceptional leadership skills, academic achievement and involvement in the student chapter of this national organization.

“Michelle has been an exemplary leader during her time at McWhorter School of Pharmacy,” said Whitney White, associate professor of pharmacy practice and clinical pharmacy specialist. “It is rare to find a student who is so passionate about learning, and one who actively seeks out opportunities for personal and professional development. She is committed to excellence in all she does, and has a bright future as a practitioner and pharmacy leader.”

Leatherwood has been a member of Samford’s Phi Lambda Sigma Beta chapter for two years, and a member of the American Pharmacists Association for four years, serving as Samford University American Pharmacists Association – Academy of Student Pharmacy chapter's president during her third year in pharmacy school. The chapter is just one of the school’s 11 active student organizations.

Phi Lambda Sigma honors leadership. After peer nominations, Leatherwood was inducted into the pharmacy leadership society. Leatherwood hopes her motivation of seeking opportunities for community and professional development will ultimately translate into providing the best care for her patients.

This scholarship has special meaning to her because she met the scholarship’s namesake at the 134th Alabama Pharmacy Association annual conference, shortly after her induction into the Beta chapter of Phi Lambda Sigma. Alabama pharmacist, Charles Thomas founded Phi Lambda Sigma at Auburn University in 1965.

Leatherwood is set to graduate in May. She will be completing a PGY-1 Pharmacy Practice Residency at Augusta University Medical Center with the University of Georgia College of Pharmacy. Leatherwood said she will miss the Samford pharmacy professors and their guidance the most.

As her professors have served as mentors throughout her pharmacy journey, Leatherwood hopes that she has been a mentor to student pharmacists.

Leatherwood will be recognized during the APhA Foundation Annual Contributor’s Breakfast March 27 in San Francisco during the American Pharmacists Association annual meeting and exposition.

Olivia Odom is a journalism and mass communication major and a news and feature writer for the College of Health Sciences.