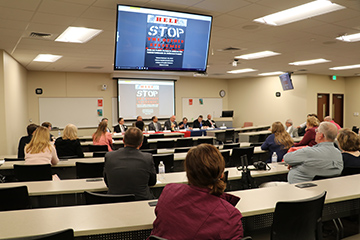 Samford University strives to provide opportunities for its students to address the profound challenges facing today’s world. With complex issues like opioid abuse, School of Public Health students Amanda Gillespie, Jordan Wulz and Maitlyn Mullen admit they don’t know all the answers, but they are willing to start the conversation.

For their capstone project is pursuit of a master’s degree in public health, Gillespie, Wulz and Mullen hosted a public forum in Samford’s College of Health Sciences facilities, providing the opportunity for the community to talk with and hear from a panel of experts who have hands-on experience in the opioid epidemic facing our society.

The students hosted the forum alongside Alabama State Representative Jack Williams, who became involved with the project after speaking with Rachel Casiday, a professor in Samford’s public health department.

“I reached out to Representative Williams in November following a tragic death in my community, and I was amazed at his responsiveness and desire to work with our students to address this epidemic,” Casiday said. “This is obviously a major public health issue, and our students have worked with passion to pull together this panel. The three came together—despite their varying backgrounds—and created a forum which, I believe, was quite successful.”

The panel included a variety of perspectives from Jefferson County’s chief coroner to a special agent with the FBI. The audience was as diverse as the panel, ranging from community members who have lost a loved one to drug overdose to the superintendent of the local school system who works against the spread of drug abuse in schools.

The panel included the following:

“Thank you to Samford for stepping up,” said panelist Jim Perdue, commissioner of the Alabama Department of Mental Health. “This is actually the first type of [public forum] that we’ve had statewide, so we’re on the forefront. We really need to hear from you. For this is not just a problem, it’s our problem.”

In the scope of the students’ capstone project, the forum served to provide stakeholder input to inform a policy recommendation the students are writing for Rep. Williams to take to the Alabama state legislature during its next session.

“We’ll now go back and listen to the tape of everything we heard tonight, and we’ll work to figure out whether or not we need a legislative policy,” Wulz said. “When we first started this, we had a certain policy in mind that we thought could help. Yet tonight, bringing together people from different areas, we heard that what we need is better coordination. Maybe our next steps are actually working toward something on the local level in terms of coordination.”

Along with pursing a master’s degree in public health, Wulz is a McWhorter School of Pharmacy resident with the Alabama Department of Public Health. Mullen works at University of Alabama at Birmingham’s Center for Clinical and Translation Sciences as a research assistant, and Gillespie works as a controlled substance pharmacy technician at Birmingham’s VA Medical Center.