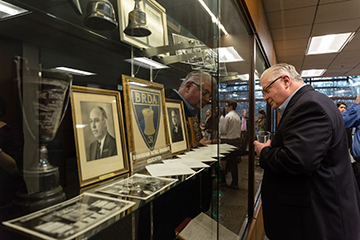 Samford University’s McWhorter School of Pharmacy continued the celebration of its 90th anniversary by dedicating the Pharmacy History Gallery in its new home in the College of Health Sciences facilities.

The gallery is a testament to the school’s 90-year history of preparing pharmacists who transform lives through academic excellence, and innovative pharmacy practice, scholarship and service.

“As we planned the new facilities, it was important to have a space to showcase the remarkable history of pharmacy,” said Michael Crouch, dean of McWhorter School of Pharmacy. “The final gallery has exceeded my hopes and expectations.”

At the dedication, Michael Flannery, author and historian with the American Institute of the History of Pharmacy, spoke about the history of the school and the important role it plays in pharmacy education.

“This school’s emergence in the 1920s and again in the 1930s came at a critical juncture of the discipline, a time when quality, rigorous education was going to be more important than ever,” Flannery said. “After the Great Depression, the school reopened in 1932, just six years before the passage of the all-important Food, Drug and Cosmetics Act, a piece of landmark legislation that took drug regulation from a mere labeling law of ingredient disclosure to one requiring established standards of safety.”

The Pharmacy History Gallery is an exhibit with three parts. The first aspect is the Robert Tom collection, which includes a series of 40 prints that depict pharmacy throughout history. The 1952 original paintings hang in the headquarters of the American Pharmacy Association, and the school will showcase three prints at a time with detailed descriptions.

The second part of the collection contains general items donated to the school. Items include mortars and pestles from various decades, medicines and other paraphernalia from the 1900s, and classic items that represent the profession.

Finally, the gallery contains items on loan from groups and individuals. An example is from the Jefferson County Pharmaceutical Association, formerly known as the Birmingham Retail Druggist Association. This group was a major advocate for the school, and the collection includes various items from when the organization was founded in 1931.

The gallery can be found on the second floor of the College of Health Sciences’ building two. The exhibits will be dynamic, rotating throughout the year, and will be coordinated by gallery curator and associate professor of pharmacy practice Terri Wensel.