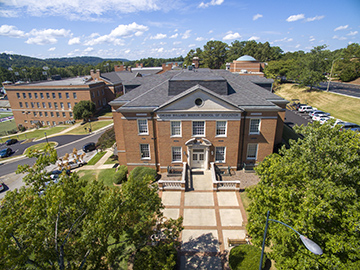 Samford University strives to provide opportunities for its students. Teacher Recruitment Day is held annually to give soon-to-be Orlean Beeson School of Education graduates the opportunity to interview with representatives from local schools. Recruiters are placed throughout the school, and students interview in a career-fair style.

Hefner has attended the Teacher Recruitment Day for many years as a student and has attended every year since he was appointed district administrator for Pelham City School.

“This event gives me renewed hope. [Students] are so willing and coachable, and they work well with others. Great people come from Samford,” Hefner said. He states that Pelham City Schools love Samford graduates because they are prepared first-year educators.

Hefner believes Samford students are successful educators because they “are taught to put the kids first and educating those kids second; to be someone the kids can come to.” In other words, Samford graduates are not just taught to be educators; they are taught the importance of being mentors for their students.

When deciding where to further his education, Hefner researched numerous schools across the country in-depth and ultimately chose Samford. He said he was impressed by the educational opportunities and was drawn to the strong teacher-student relationships available.

“I didn’t want to be just other person,” Hefner said. “Here, I can call most professors by name, and they can do the same with me.” Throughout his time as a Samford student, he has been continuously impressed by both the professors and the business side of operations. “Everyone is incredibly flexible and willing to work with you,” he said. “They want to make it a good experience, and that is not true for most universities.”

When asked if Samford graduates were properly trained and ready to do the job, Hefner explained that he felt Samford’s programs prepare first-year educators as well as any other universities, if not better. “I’ve probably seen more success from a first-year Samford teacher than from most other universities.”

University officials noted that 99 percent of May 2015 graduates, the most recent year for which statistics are available, found job placement within three months of graduation.