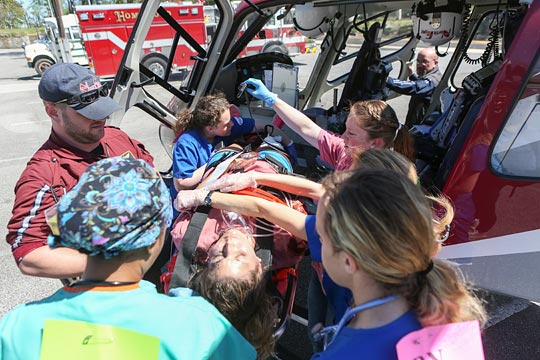 The environment was meant to feel chaotic as Samford University’s College of Health Sciences conducted its annual disaster simulation April 4. Walking into the recreation center at nearby Dawson Memorial Baptist Church, which had been converted to the disaster’s relief center, you quickly noticed how the space was full of people, noise and adrenaline.

But as you oriented yourself to what was taking place, you quickly began to see teamwork at play. Nursing students worked alongside student athletic trainers. A student in the Department of Communication Sciences and Disorders held an IV bag for a victim as a social work student who speaks Spanish translated for a pharmacy student.

With more than 350 students and employees involved, Samford’s disaster simulation is an example of interprofessional education in action, and the event lives out the mission of the College of Health Sciences as it prepares graduates in an interprofessional learning community to promote and improve the health and well being of individuals and communities.

The simulation was organized by the college’s new Experiential Learning and Simulation Center. Student from all fours schools—School of Health Professions, Ida Moffett School of Nursing, McWhorter School of Pharmacy and School of Public Health—participated as responders and victims. Ten community partners, including the American Red Cross, Homewood Fire and Regional Paramedic Services, were also on hand as they would be in an actual disaster.

This year’s scenario was a natural-gas fire in a dormitory. Responders encountered victims with a variety of medical situations that related to the scenario, including burns, and escape trauma such as broken bones, respiratory issues and more.

Supplies were limited, and the relief center had fewer beds than there were patients. All of these factors played to one of the main lessons of the simulation: teamwork.

“You can’t work in a disaster without working together because everyone will be working outside of his or her normal role,” said Cindy Berry, nursing professor and Samford’s emergency readiness coordinator. “You have to use every resource you have because you don’t have many.”

For many students, it was their first time to participate in the simulation, and many were assigned leadership roles, like charge nurse, to help direct and organize their peers.

“I was assigned as a charge nurse for our pod, and it was a bit overwhelming. You have 24 beds, and you’re trying to prioritize who needs help and which responder—who is actually your classmate—needs more help than others,” said Brinn Loftin, a senior nursing student. “It’s great that Samford does this because we need to know how to work with everyone else. Once we get to the hospital, in real life, it’s not you by yourself. You will interact with all sorts of other professions, and you have to know how to communicate.”

Darrel Chance, a division chief with Henderson Fire Department outside Nashville, Tennessee, attended the simulation as an observer. He has known about the annual simulation since his daughter, Courtney, a senior nursing student, first came to Samford.

“I was talking with some of the other first responders before the event today, and this [simulation] is so important for students to get a glimpse at what the real world might look like. We talked about how fantastic the education is at Samford and how well prepared they are, but even so, a lot of this is done in theory. In my estimation, this [simulation] is as important as anything they have done their entire time,” Chance said.

A new community partner was the Birmingham Baptist Association, which participated with its feeding unit. Dietetic interns in the School of Public Health’s Department of Nutrition and Dietetics worked alongside volunteers to serve lunch.

“It’s amazing to see there is a full-service kitchen operating out of a van,” said Megan Andrews, who is pursuing a master’s degree in nutrition, in regard to seeing how the Birmingham Baptist Association’s feeding unit operates. “I didn’t realize that I would have such a role to play in a disaster, so seeing that we do have role in providing food and help to those in need is eye opening.”