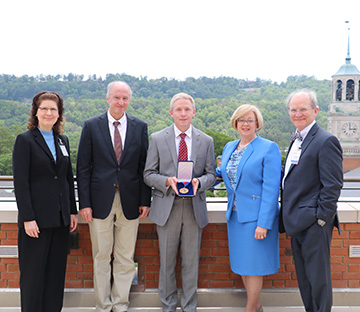 Samford University’s Healthcare Ethics and Law Institute (HEAL) selected a topic for this year’s conference that is prominent on the minds of health care practitioners, attorneys, ethicists and even consumers: effective pain management in an era of opioid abuse.

Housed under the College of Health Sciences’ Center for Faith and Health, HEAL’s recent annual conference was designed to encourage dialogue about the ethical framework for ensuring effective pain management for those in need, while at the same time, finding ways to curtail the current opioid epidemic.

Dennis Sansom, HEAL fellow and professor and chair of the philosophy department in Samford’s Howard College of Arts and Sciences, provided the day’s first presentation, offering statistics that put the epidemic in perspective.

To help facilitate this dialogue, HEAL recruited a diverse selection of speakers who could provide different stances on this complex issue. The conference’s two keynote speakers first met debating this very topic on Twitter.

The first was David Juurlink, a staff internist and head of the Division of Clinical Pharmacology and Toxicology at Sunnybrook Health Sciences Centre in Toronto, Canada.

“You heard Dr. Sansom mention that pain is called the fifth vital sign, but it is not. I can measure heart rate, blood pressure and temperature with a high degree of accuracy, but the same is not true of pain. Nevertheless, a push came from a variety of national organizations in the late 1990s to treat pain better,” Juurlink said. “There were even books written in support, which I think is due in part to the fact that pain is important, and doctors, by their nature, want to help people.”

Stefan Kertesz is an associate professor at University of Alabama at Birmingham’s School of Medicine and chair of the Albert Schweitzer Program, which two Samford Ida Moffett School of Nursing graduate students will take part in this coming year.

“We have to talk about the underlying understanding and misunderstandings that have allowed these things to flourish, which includes the misconception of addiction; that epidemiology has been misunderstood, clinical reasoning has been misstated and ordinary rules have been suspended. There has been a deceptive allure of simple solutions, and the result is an ethical violation,” Kertesz said.

In the afternoon, the conference provided three breakout sessions. Andrea Collins, assistant professor in Ida Moffett School of Nursing, and Maryam Iranikhah, associate professor in Samford’s McWhorter School of Pharmacy, led a session that provided interactive conversations, leading participants through scenarios and asking how they would respond.

Additional sessions were led by Thomas Kopec, assistant professor in Samford’s School of Health Professions, and Denis Tanner, associate pastor for spiritual formation and students at Birmingham’s Shades Crest Baptist Church and founder of Whatever It Takes, an organization that works to prevent substance abuse and to support those who are already struggling.

In the midst of the conference, HEAL paused to recognize two individuals in the health care industry who are nationally recognized for their contributions to heath care ethics with the institute’s Pellegrino Medal. The first recipient was family physician Robert Record, CEO and medical director of Christ Health Center in the Woodlawn neighborhood of Birmingham. The second was Christine Ritchie, the Harris Fishbon Distinguished Professor in Clinical Translational Research and Aging at the University of California San Francisco.

The Pellegrino Medal is named after Edmund D. Pellegrino, called the “father of the American bioethics movement,” who in 1998 received the first lifetime achievement award granted by the American Society for Bioethics and Humanities.