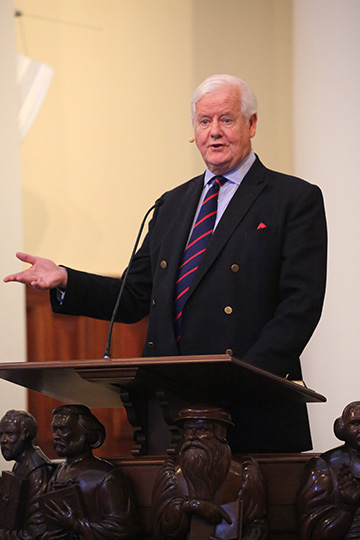 Guinness spoke on the topic of covenantalism, its history rooted in the covenant at Sinai in the Old Testament and in the Reformation as well as its relevance today for the United States. He argued for covenantal societies at their best.

“Many of the things that are in crisis today can best be remedied and restored by an understanding of the links between the Old Testament and the Sinai covenant and where we are today,” Guinness began. “We can see that while Sinai was a covenant with the Lord, and the United States at its best was a covenant under God, increasingly, this country has become a covenantal constitutional society without God.”

A covenantal society is all about relationships, Guinness said. One of its strengths is that it puts people in covenant with one another as well as with God. Guinness said that covenantal societies have “a reciprocal responsibility.” But in the Sinai covenant, the covenant reverberates not only to how you are to treat your kinsmen, but also how you are to treat the stranger. In the Sinai covenant, there is only one mention of loving your neighbor but more than 30 mentions of loving the stranger, Guinness said.

“The stranger may not be in our image,” he said. “But, he or she is in God’s image, and we are to treat them like a neighbor.”

The other strength of covenantalism is it helps to reunite faith and freedom, said Guinness, but its weakness is that humans do not keep their side of the covenant. Despite this weakness, our hope is found in the Lord keeping his side, his promises and his word.

“We humans are not good at promise keeping, but our Lord keeps his word,” Guinness said. “He is the covenant keeping God. Thank God that he keeps his word.”

Prior to community worship, Guinness spoke to Beeson Divinity’s Board of Advisers and gave an interview for the Beeson Podcast, which will air in June.

The descendant of Dublin brewer Arthur Guinness, Guinness was born in China to medical missionaries during World War II. He later completed a D.Phil. from Oxford University and served as a freelance reporter for the BBC. Guinness is currently a senior fellow at the Oxford Centre for Christian Apologetics.

He is the author and editor of more than 30 books, including The Call, Time for Truth, Long Journey Home, Unspeakable, A Free People’s Suicide, The Global Public Square and Renaissance. His most recent book is Impossible People, published by InterVarsity Press.