Samford Arts to Present ‘The Marriage of Figaro’ 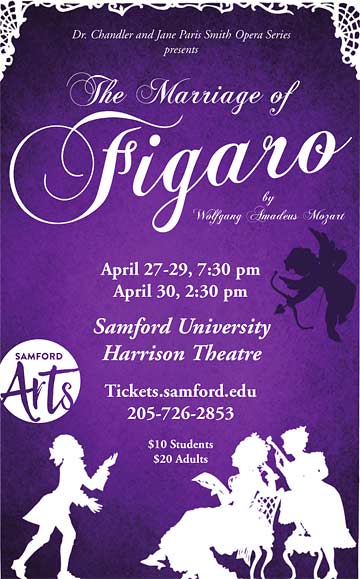 According to Kristin Kenning, assistant professor of voice and director of Samford Opera, “It is our joy to present Mozart’s shining jewel of the operatic repertoire, The Marriage of Figaro. Written in 1786 with an Italian libretto by Lorenzo da Ponte, the opera has remained one of the most performed, most beloved operas of all time.”

The Marriage of Figaro is a delightful comedy with twists and turns about love, betrayal and forgiveness, Kenning said. The opera is based on a revolutionary play written by French playwright Beaumarchais in 1784.

“If you’ve never seen an opera, this is the perfect introduction to the art form. Sung in English, the music is stunningly beautiful, and the plot is hilarious and engaging,” said Kenning.

Each year, Samford Opera students have the opportunity to perform a main-stage opera production and a scenes program. Additionally, opera students perform in the Birmingham community through workshops at schools and retirement communities, sharing their talents and honing their skills.

Showcasing the students of the School of the Arts, the production includes a charming set, elaborate costumes, a full orchestra and outstanding performers, she added.