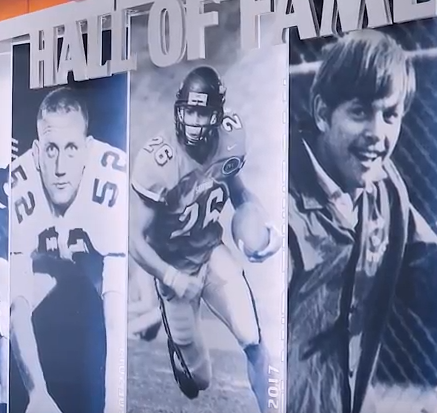 The Samford University Athletics Hall of Fame was officially dedicated with a ribbon-cutting ceremony April 19 at Pete Hanna Center.

Athletics Director Martin Newton opened the ceremony by thanking everyone involved in putting it together. Former Samford board of trustees chairman Bill Stevens and Vic Nichol, president of First National Bankers Bank, then cut the ribbon, officially opening the Hall of Fame.

“This is something that has been near and dear to my heart,” Newton said. “The Hall of Fame allows us to honor and show respect to those in the past, those that came before us that laid the foundation for our current success.”

In addition to inductee plaques and displays, the hall of fame includes a historical timeline with photos depicting important moments in the 139-year history of Samford athletics. Samford’s first athletics team was the 1878 baseball team. The men’s basketball program began in 1901, and football began in 1902. The football team played in the first game at historic Legion Field in 1927.

Inside the timeline are video screens, including a touch screen with video tributes to all six inductees, a welcome from Newton and other videos from Samford’s past. Another monitor contains a slide show of Samford’s conference champions.

Tickets to the dinner and induction ceremony are available for $100 each until April 30; please use SAHOF for the password.

Walter Barnes was a student-athlete in basketball and track during 1953-56, and coached in various roles for the men’s basketball, football, and track and field programs. As basketball head coach (1959–63), he compiled a record of 61-40 over four seasons. His 1960–61 team had the best regular season in program history, posting a record of 23-1. Barnes earned multiple Samford honors, including the Omicron Delta Kappa Leader with Impact Award (2001), Philanthropist of the Year (2002), Alumni of the Year (2007) and Life Service Award—Howard College Bulldog Athletics (2012). He was inducted into the Central Alabama Softball Association Hall of the Fame in 1994.

At Samford, Lauren Blankenship won three Ohio Valley Conference Cross Country Championships and three OVC Runner of the Year awards. A three-time qualifier for the NCAA Cross Country National Championships, she earned All-America honors as a senior in 2007 after finishing 24th. In track and field, she was a three-time OVC indoor champion in the 3,000- and 5,000-meter runs, a four-time OVC outdoor champion in the 5,000 and a two-time OVC Outdoor Champion in the 10,000-meter run. Blankenship qualified for the NCAA Outdoor National Championships for 5,000 meters, and won All-America honors as a sophomore in 2006 and again as a senior in 2008. She holds several Bulldog records in three sports, including the 5K in cross country; the 3,000, 5,000 and distance medley relay in indoor track and field; and in the mile, 3,000, 5,000, 10,000, 4 x 800, 4 x 1,500 and distance medley relays in outdoor track and field.

The name Bobby Bowden is synonymous with college football. The Birmingham native won 377 games over his career as a head coach at Samford, West Virginia and Florida State. Bowden played on the freshman team at Alabama in 1948 before transferring to Samford (then Howard College), where he played from 1949 to 1952 and earned All-America honors in 1952 as a quarterback. While serving as head coach at his alma mater from 1959 to 1962, Bowden amassed a record of 31-6, posting the highest winning percentage of any coach in school history. He was hired as head coach at West Virginia in 1970 and served in that role until 1975. In 1976, Bowden began his legendary run at Florida State. During his time with the Seminoles, Bowden won 304 games, and he led the program to 1993 and 1999 national titles. Bowden was inducted into the College Football Hall of Fame in 2006.

Cortland Finnegan was a three-time All-American during his four years in a Samford uniform. He was named the Ohio Valley Conference’s Defensive Player of the Year as a sophomore in 2003, and he led the team in tackles from his safety position in each of his final three seasons. Finnegan was drafted in the seventh round of the 2006 NFL Draft by the Tennessee Titans. During his 10-year NFL career, he played for the Titans, St. Louis Rams, Miami Dolphins and Carolina Panthers. He was named All-Pro and was selected for the Pro Bowl with the Titans in 2009. In his final NFL season in 2015, Finnegan helped the Panthers to an appearance in the Super Bowl. He finished his NFL career with 663 tackles, 7.0 sacks and 21 interceptions, returned for 426 yards and four touchdowns.

Charlie Owens won the 1972 NCAA Division II national championship as a member of the Samford men’s tennis team. Earlier, Owens won the Orange Bowl International Tennis Championship in 1966 at the age of 16. He also competed in the 1970 Summer Universiade in Turin, Italy, where we won bronze medals in both the men’s doubles and mixed doubles. After his time at Samford, he made the third round of the U.S. Open in 1973 and 1974 in singles and doubles. He also reached the third round of Wimbledon in 1975 in singles and doubles. In doubles, he and partner Mike Estep defeated third seeds Arthur Ashe and Roscoe Tanner on the way to the third round at the 1974 U.S. Open. In his professional career, Owens won 56 singles matches and 51 doubles matches.

Joey Mullins is assistant athletics director for communication in Samford’s Department of Athletics.