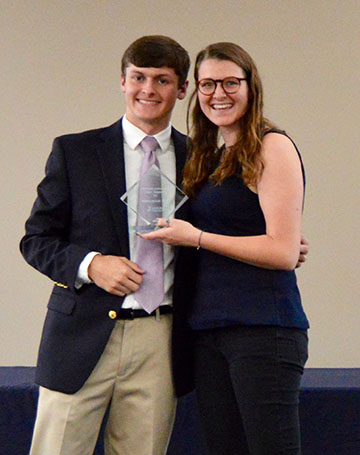 Five organizations were honored April 12 at Samford University’s second annual Student Organization Awards. The event was coordinated by the Office of Student Involvement and Leadership.

Twelve organizations from more than 100 on campus were nominated for awards. Winners were selected by a nine-member committee of students and employees from across the university.

The Society of Professional Journalists was honored as Outstanding New Student Organization. It was recognized for hosting a variety of networking events, as well as partnering with and promoting other on-campus student organizations and departments. According to the selection committee, the society “displayed initiative in organizational development and potential to contribute to the quality of life at Samford University.”

Jane Edwards, a senior biology major from Nashville, Tennessee, was named Outstanding Student Organization Leader. Edwards played an active role in founding the organization You’re Not Alone. The committee noted that “with great enthusiasm, [Edwards] has sought to increase awareness and break the stigma around mental illness, specifically anxiety and depression.”

The Outstanding Student Organization Adviser is Laura Promer, instructor and director of undergraduate studies in the Department of Communication Sciences and Disorders and faculty adviser to the Samford University National Student Speech-Language-Hearing Association. The selection committee noted that Promer “shows a deep commitment to developing student leaders, whether that be through the open-door office policy, coordinating new member meetings, or bringing homemade cookies to chapter and executive board meetings.”

The American Pharmacists Association-Academy of Student Pharmacists was honored as Outstanding Graduate Student Organization for its initiatives in promoting health on campus. According to the selection committee, the organization “has helped transform the lives of people within and outside the organization.”

The International Club received the Outstanding Undergraduate Student Organization award. It was recognized for hosting multiple events on campus, including a tailgate at homecoming and a fair on Ben Brown Plaza featuring cultural food, dance and art that reached hundreds of students and employees. The selection committee noted that the group “has been instrumental in solidifying strong bonds of friendship among students from all across Samford and the world.”

Laura Breedlove, director of student leadership and involvement, thanked the student organizations and individuals who were recognized.

“Samford is better because of you,” Breedlove said. “We are grateful for your commitment to your clubs, which provide a place on campus for individuals to connect, engage and enhance the learning that is happening within the classroom. Your impact will not be quickly forgotten.”

Olivia Williams is a journalism and mass communication major and a news and feature writer for the Division of Marketing and Communication.