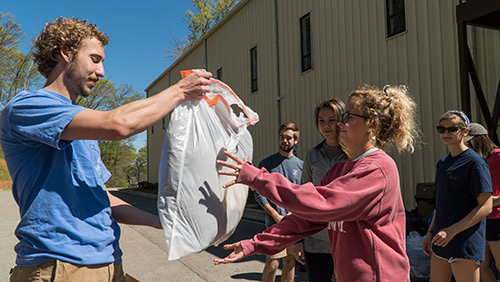 On a beautiful early spring day, nearly 1,000 Samford University students volunteered their time and resources to serve more than 40 ministries and organizations across the metropolitan Birmingham area during the annual Samford Gives Back Day.

The day of community engagement and service was coordinated by Samford’s Frances Marlin Mann Center for Ethics and Leadership. Center director Drayton Nabers noted that the participation was a 45 percent increase over previous years.

Samford’s historic relationship with the East Lake community was evident with the students working on several projects at East Lake United Methodist Church near the location of the university’s initial Birmingham campus.

In addition to painting and other update projects inside the buildings, students worked on a community garden that began last year. According to Cheryl Hinnen, a 2006 Samford graduate and associate pastor at the church, the garden serves as an educational space for children in the neighborhood, for the church’s feeding ministry and for summer nutrition classes.

“It is great that Samford students are giving back to the place where Samford began [in Birmingham],” Hinnen said. “The way we seek to serve in this world is by sharing God’s love, and being his hands and feet in real, tangible ways related to hunger.”

“We’re excited about today because we came last year and started the garden,” Keller said. “Being able to see how it grown over the last year, as well as continuing to make that better for people in the community is a really cool thing.”

Nearby at the Lovelady Thrift Store in East Lake, members of the new Delta Delta Delta sorority were participating in their first Samford Gives Back Day. The Samford students were assisting with several projects, including preparation for a fashion show for the women served by the Lovelady Center. The center assists women who are recovering from drug or alcohol addiction.

“There are a lot of great women that I have met who are excited for us to be here, excited to work with us,” said Tatianna Turrentine. “They deserve all the help they can get because they are working toward a really different thing—sobriety.” Turrentine is a sophomore political science major from Phenix City, Alabama.

At Magic City Woodworks near downtown, director Lawrence Sheffield praised the ongoing relationship the organization has with Samford’s Alpha Tau Omega fraternity. Members work at the organization’s workshop and warehouse throughout the year, but for Samford Gives Back Day, they were painting spaces and clearing exterior areas.

“I love working with the men who come here to learn new skills,” said Jack Henry, a sophomore business major from Marietta, Georgia. “These men have an incredible work ethic, and that’s the reason so many of us want to help here.”

The four-year-old ministry offers one-year paid apprenticeships to “help young men bridge the gap between unemployment and employment” through the art of woodworking, Sheffield said.

Samford’s ongoing partnership with Cornerstone Schools of Alabama was reinforced by dozens of students who worked at the middle/high school facility in the Huffman area of Birmingham. Students painted hallways and helped with spring clean-up outside.

Katie Neisler, a senior from Jacksonville, Alabama, and a member of Samford’s volleyball team, was mowing grass while other students were clearing debris from gutters.

Joy Wilkoff, a sophomore English major from Birmingham, said she had heard about Samford Gives Back Day from friends and wanted to participate. “I like that we are making this space better for the students who attend Cornerstone,” Wilkoff said while wielding a paintbrush.

“In addition to the relationships you build with our students, you give them a positive example of what a college student looks like,” Agee said. “Having you on Cornerstone’s campus gives us an opportunity to say ‘this is how you get there’ in pursuing your dreams.”

Samford will be partners with Cornerstone and New Rising Star Missionary Baptist Church to provide a series of sports camps this summer.

Blake Savage, a sophomore, encouraged his fellow students to “stretch yourselves and be a servant.”

Reflecting on the theme of the day, “Lay a Foundation,” Samford President Andrew Westmoreland thanked the students for participating in what some would consider “routine, mundane tasks.”

“These are God-ordained jobs for you this morning. Look on this experience as meaningful, substantive involvement,” Westmoreland said. “Thank you for volunteering this morning and throughout your life to make a significant difference in the world.”

With reporting assistance from Erin Bognar, BJ Millican, Brad Radice and Olivia Williams of the Division of Marketing and Communication.