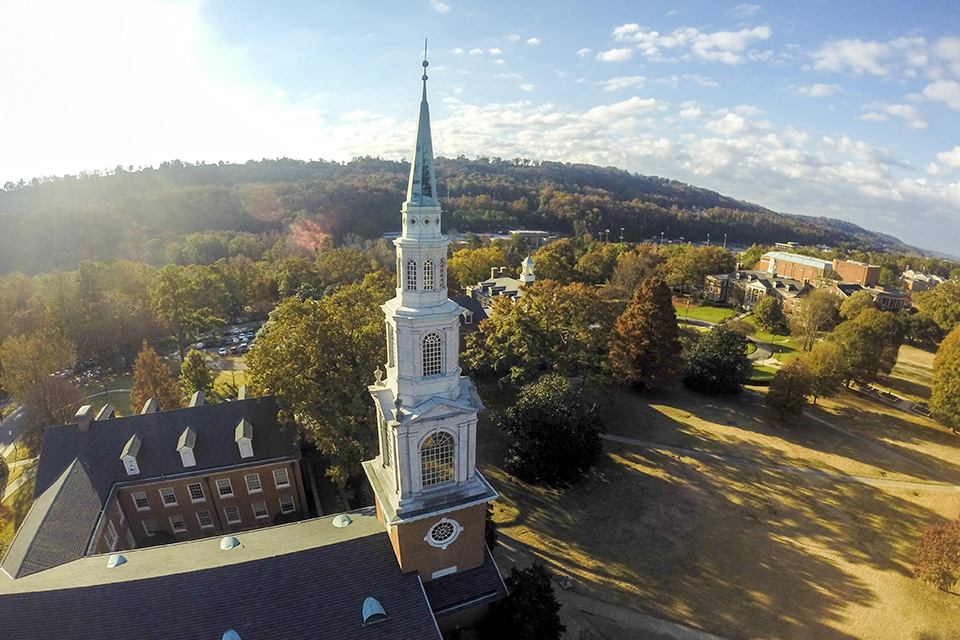 Themes of friendship, faith and scholarship were the focus of Samford University’s annual graduate prayer breakfast May 12. About 300 graduates, faculty and family members gathered for what has become an important tradition of spring commencement weekend.

Julia Jordan-Lake, a psychology major and University Fellow from Brentwood, Tennessee, said, “For Christians, a friendship is never between just two people. It is a group of three. Jesus is always the center of a Christ-centered friendship.”

Noting that finishing a degree was the top accomplishment at Samford, Jordan-Lake said “a close second are the friendships we have developed here.”

Ashley George, assistant professor of communication studies, said one of her favorite things about Samford is the sense of community.

“It may be difficult to see now, but this season of your life at Samford is something you will look back on and cherish,” George said. “You have developed community through your time here, and that community will stay with you forever.”

Jeff Leonard, assistant professor of religion, focused on those who sacrificed to make it possible for the graduates to earn a Samford education.

“They have done a lot so you could be here,” Leonard said. “The flip side of that is your responsibility. You must treat what you have learned as the springboard for serving other people.”

Leonard equated study as an act of worship and service and encouraged the graduates to “study with a servant’s heart.”

Juliette Stanley, a music major from Leighton, Alabama, admitted humorously that she did a Google search of the word scholarship to make sure she was speaking on the correct topic. She told graduates that scholarship means both learning and support.

“It is important to be forever learners. We need to stop and listen and learn something from someone,” she said.

Noting that graduates are headed into the “journey of post graduation” that will mean lots of decision-making, Stanley said, “When you are faced with decisions, scholarship is knowing that you have the support and that you have more things to learn. Just because you graduate doesn’t mean you stop learning or giving support to your friends.”

Keith Elder, dean of Samford’s new School of Public Health, said most of what he learned about faith came from his mother. After his father’s death, she sometimes worked three jobs to provide for her seven children.

“When I think about her and how she believed that God would do his part but now she had to do her part, I am inspired,” Elder said. “Having that foundation from my mother helped me with my own faith.”

Thomas Wildeman, a senior marketing major from Spartanburg, South Carolina, talked about watching friends who dealt with faith struggles and other difficulties while at Samford.

He said, “Don’t miss the opportunity to speak to your friends, to uplift them and to encourage them. An encouraged community is a community that is empowered to be in Christ.”

Samford President Andrew Westmoreland noted the major physical changes that had happened to the campus while the class of 2017 was student.

Relating the construction of Cooney Hall for Brock School of Business, Westmoreland said he sometimes wondered if the building would ever be complete.

“It may seem to you that it has taken forever for your foundation here to be created,” he said. “That’s what you have obtained here. The foundation. Not the whole house or building.

“Unless the foundation is right, the house will fall. I can’t wait to see what is going to happen as you get out there and God works with you to building the house.”

Following the breakfast, graduates gathered with Westmoreland for a group photo on the steps on Harwell G. Davis Library and then retraced the walk along Centennial Walk that is part of freshman orientation.

The prayer breakfast is hosted by Westmoreland and coordinated by the Office of Spiritual Life.