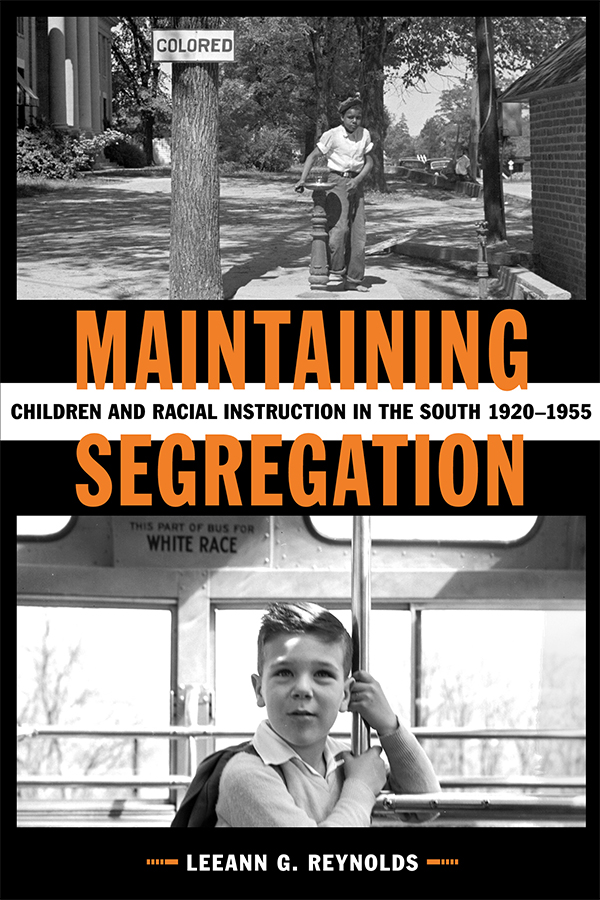 A new book, Maintaining Segregation: Children and Racial Instruction in the South, 1920–1955 by Samford University history professor LeeAnn G. Reynolds, explores how black and white children in the early twentieth-century South learned about segregation in their homes, schools and churches.

As public lynchings and other displays of racial violence declined in the 1920s, a culture of silence developed around segregation, serving to forestall, absorb and deflect individual challenges to the racial hierarchy. The cumulative effect of the racial instruction Southern children received, prior to highly publicized news such as the Brown v. Board of Education decision and the Montgomery bus boycott, perpetuated segregation by discouraging discussion or critical examination.

As the system of segregation evolved throughout the early twentieth century, generations of Southerners came of age having little or no knowledge of life without institutionalized segregation. In her new book from LSU Press, Reynolds examines the motives and approaches of white and black parents to racial instruction in the home and how their methods reinforced the status quo. Whereas white families sought to preserve the legal system of segregation and their place within it, black families faced the more complicated task of ensuring the safety of their children in a racist society without sacrificing their sense of self-worth. Schools and churches functioned as secondary sites for racial conditioning, and Reynolds traces the ways in which these institutions alternately challenged and encouraged the marginalization of black Americans both within society and the historical narrative.

In order for subsequent generations to imagine and embrace the sort of racial equality championed by the Civil Rights Movement, they had to overcome preconceived notions of race instilled since childhood. Ultimately, Reynolds’ work reveals that the social change that occurred due to the Civil Rights Movement can be fully understood only within the context of the segregation imposed upon children by Southern institutions throughout much of the early twentieth century.