"Now is a Good Time for You to Take Some Chances,” Nunnelley Tells Arts and Sciences Graduates 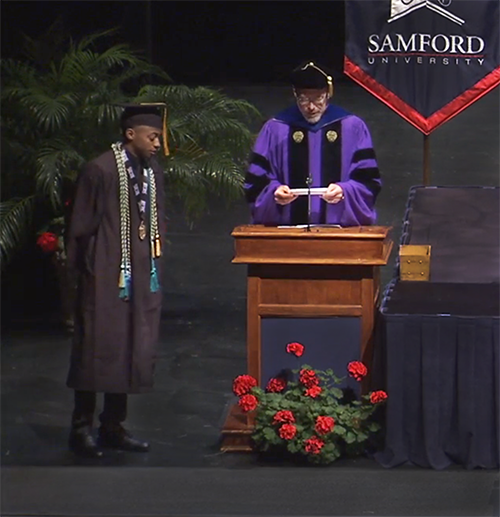 Howard College of Arts and Sciences Dean Tim Hall greets a member of the Class of 2017.

Nunnelley has enjoyed a distinguished career in journalism, including managing editor of The Birmingham News, projects director for Associated Press Managing Editors Association, executive director of the Alabama Initiative for Independent Journalism and editor of BirminghamWatch. The JMC alumni Wall of Fame member also is author of the books Building Trust in the News and Janie Shores: Trailblazing Supreme Court Justice, and coauthor and editor of Cussing Dixie, Loving Dixie: 50 Years of Commentary by H. Brandt Ayers.

The veteran journalist observed that she has a special connection to the Class of 2017 because fellow JMC majors were the largest single category of graduates. She offered words of professional encouragement for them and noted two other important qualities of the graduates: their experience outside their own cultures and their community service.

Nunnelley noted that only about one-third of the class is from Alabama. “I think that’s a very good thing,” Nunnelley said. “That mix of students, from 19 states in all, from California to Wisconsin and back around to Florida, helps everyone see opportunities nationally, as well as in a region or state or hometown nearby.”

She also said that one in 10 of the class members took advantage of Samford’s many international study programs. “What a gift to you and to the communities you’ll become a part of, for you to have a personal world view,” she said. Nunnelley cited a favorite quote from Mark Twain go illustrate the importance of that kind of experience: “Travel is fatal to prejudice, bigotry and narrow-mindedness. Broad, wholesome, charitable views of men and things cannot be acquired by vegetating in one little corner of the earth all one’s lifetime.”

Of course, someone must tell the world’s stories, even when the truth is uncomfortable or unwelcome. These are the journalists, who persist in their important work through economic hard times and shifting public opinion.

“Recent hard times in journalism have taught me to value the craft, wherever and however it’s used,” Nunnelley said. “Colleagues pushed out of newsrooms get rave reviews for skills that are second nature to them—meeting tight deadlines, developing the art of listening, writing cogently.”

Nunnelley asked her audience of graduates, faculty and families to support those who have chosen to do that work, “partly by acknowledging what they stand for.” She said the ethical code of journalism (as opposed to “the media,” with its tendency to target “our pre-existing interests and opinions”) requires journalists to be something other than “stenographers, transcribing anything and everything anybody says without assessing its importance or verifying its accuracy.”

Nunnelley read highlights from the Society of Professional Journalists Code of Ethics, including the following:

• [We] believe that public enlightenment is the forerunner of justice and the foundation of democracy. . . . Ethical journalism strives to ensure the free exchange of information that is accurate, fair and thorough.

• Seek truth and report it.

• Take responsibility for the accuracy of your work.

• Be vigilant and courageous about holding those with power accountable.

• Give voice to the voiceless.

• Support the open and civil exchange of views, even views you find repugnant.

• Respond quickly to questions about fairness.

Nunnelley also offered a few “home remedies” to use against the sort of media many citizens say they don’t trust. “Take time to check out the source of an item, often in very fine print,” she said. “If you and I haven’t read anything we disagree with recently, we’re likely in a partisan bubble. If you never see a correction, I almost guarantee it’s not journalism you’re reading."

“My goal is that journalism—a particular kind of media with a historic mission—continues to have a respected place on today’s crowded information table,” Nunnelley said. “I trust that among the graduates today are those who’ll be undaunted in pursuing that career on all of our behalf.”

Having been assured that all the graduates of 2017 are fearless, Nunnelley told them that “now is a good time for you to take some chances.”

“Take the chance to chase your dream, or find one; to express what you really want, against the odds; to reach beyond what you know you can do, and hope for success but risk failure. You have the safety net of time,” she said.

Psychology major and senior class president Julia Jordan-Lake offered closing remarks inspired by Jeremiah 29:11: “‘For I know the plans I have for you,’ declares the Lord, plans to prosper you and not to harm you, plans to give you hope and a future.”

Jordan-Lake explained that this hopeful message follows the verse in which God promises the Israelites that although they must wait through two generations, they will enter the Promised Land. She urged her classmates to remember this as they consider which of their personal goals they have or haven’t met. “The waiting is okay,” she said. “God did not break his promise to the Israelites in the book of Jeremiah, and he will not start today.”