Samford Wraps Up 175th Anniversary Celebration During May Commencement 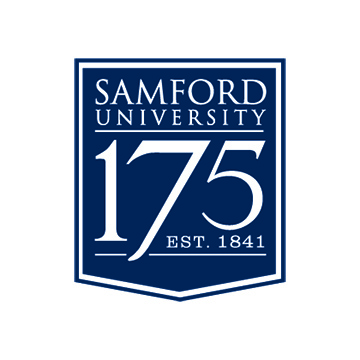 Samford University wrapped up a yearlong celebration of the school’s 175th anniversary with a series of seven commencement programs during May. The printed programs for the various Samford colleges and schools listed approximately 1,200 total candidates for degrees.

Samford President Andrew Westmoreland and Provost Michael Hardin presided over each of the ceremonies, all but one of which were in Samford’s Wright Center. The program for Beeson Divinity School was in Hodges Chapel.

Samford’s College of Health Sciences opened the commencement schedule May 5 with a program for its graduate degree recipients. Students representing the schools spoke: Nathan Ewell, Ida Moffett School of Nursing; Jordan Webb, School of Health Professions; Zach Burns, McWhorter School of Pharmacy; and Amanda Gillespie, School of Public Health. They spoke on the theme of calling and how it has impacted their lives.

Edwin Hurley, senior pastor of South Highland Presbyterian Church, Birmingham, told Beeson Divinity School graduates May 8, “Nothing will be impossible for you who have faith; not necessarily a massive mountain size faith, but a mustard seed–size faith, small yet ready to burst forth and grow into a great protective tree or a mountain that moves, because this faith is focused not distracted.”

Laura Kelly, management director for CoreLogic Inc., Westlake, Texas, told Brock School of Business graduates May 12 that they are the CEOs of their future and can unlock the untapped potential of their lives. She stressed “success is not a destination; it’s a never-ending journey.”

The importance of a Samford education and a passion for calling were recurring themes of four student speakers at College of Health Sciences undergraduate commencement May 12. Speakers were Ken Gammada, School of Health Professions; Lana Hunt, Ida Moffett School of Nursing; Mark Gilliam, McWhorter School of Pharmacy; and Emily Mantooth, School of Public Health.

Federal Judge William H. Pryor Jr. of the U.S. Court of Appeals 11th Circuit told graduates of Samford’s Cumberland School of Law May 12 that commencement for a law school is more than a celebration of the success of its students and faculty. Law school commencement celebrates “the American commitment to the rule of law, which is the bulwark of our freedom,” said Judge Pryor.

Carol Nunnelley, executive director of the Alabama Initiative for Independent Journalism, told Howard College of Arts and Sciences graduates May 13 that, having been assured that all the graduates of 2017 are fearless, “now is a good time for you to take some chances. Take the chance to chase your dream, or find one; to express what you really want, against the odds; to reach beyond what you know you can do, and hope for success but risk failure. You have the safety net of time.”

Graduates from Samford’s School of the Arts and Orlean Beeson School of Education were encouraged by Neil Davis of Davis Architects, Birmingham, to step out in faith as they pursue their callings and watch the connectivity between faith, passion and work come to fruition in their lives. Davis reflected on his journey and passion for architecture during commencement for the two schools May 13. Davis and his father, the late Charles Davis, designed the majority of the buildings on Samford’s campus.

School of the Arts senior Kathryn Lamb received the Velma Wright Irons Award presented to the graduating senior with the second-highest cumulative grade point average across all campus colleges and schools.

Lamb, sports medicine major Joshua Lloyd Washington and Brock School of Business student Corey Storrs White received the John C. Pittman Award. Named for a Samford alumnus and longtime trustee, the award recognizes graduating seniors who exhibit a serious commitment to being a student and achieving academically, to honoring Christ, and to personal health and involvement in student life.