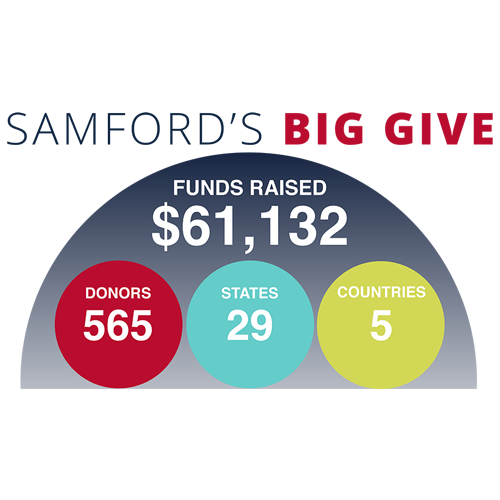 Samford University’s fifth annual Big Give, a social media-driven crowdfunding campaign, generated more donors than ever, raising more than $60,000 as of Monday, May 22.

The campaign, originally designed to raise $55,000 in a 36-hour period May 18–19, continues to receive gifts after exceeding the original goal, according to Karen Templeton, Samford’s director of annual giving.

Templeton added that 555 donors from 29 states and five other countries participated, a huge increase from the 380 alumni, parents and other friends who gave in 2016. The total of $60,302 is the largest amount ever raised during the Big Give and a significant increase over last year’s total of $43,890.

This year’s initiative supported 10 projects, three of which were fully funded as of May 22.

The Avery White Scholarship Fund in Brock School of Business ensures that a Samford student will be awarded a $2,000 scholarship each year in perpetuity to permanently honor the legacy of student Avery White, who died unexpectedly in January. The ultimate goal is to fully endow the fund.

“Avery’s greatest legacy was his passion for helping others in every sphere of life,” said Darin White, professor of marketing and Avery’s father. “The three siblings that attended Samford with Avery and I all have shared memories of seeing Avery around campus helping students with homework, sitting next to a lonely soul in the cafeteria, giving a student a ride to the store, etc. We know that Avery’s scholarship will go toward assisting future Samford business students who, like Avery, have a heart for reaching out to those on our campus and beyond in need.”

IMPACT (Inspiring Minorities to Pursue Academics and Community Together) will promote a successful social and academic experience to underrepresented groups on campus. The goal is to increase the academic, career and social success of first-year minority students by helping develop a sense of being connected to the larger Samford community, according to Denise Gregory, Samford’s director of diversity and intercultural initiatives.

“I am so excited about the overwhelming support for the IMPACT Fund,” Gregory said. “We were able to surpass our goal and demonstrate the value that any amount contributed is important. The majority of the gifts were $50 or less. When several donors come together, they make a huge impact on the IMPACT Fund. I am grateful for the support.”

A remodel of the studio for the Samford News Network in the Department of Journalism and Mass Communication also exceeded its goal, helped by a significant contribution from 1992 Samford JMC alumnus Tony Hale. Hale is a multiple Emmy Award–winning actor who was inducted into the JMC Wall of Fame in 2014.

Templeton noted that two other projects were close to meeting their goals: East Side Academic Enrichment and Sports Camp, sponsored by Orlean Beeson School of Education and the Frances Marlin Mann Center for Ethics and Leadership, and Healthcare 360: Seeing is Believing, sponsored by the College of Health Sciences.

“May 18 and 19 were inspiring days full of energy and enthusiasm for Samford,” Templeton added. “It was great to see the social media posts from alumni and friends all showing their support for the Big Give. This event is as much about encouragement and showing pride as it is about providing funding to the projects. The faculty and staff involved with each project were creative and effective in fundraising for their initiatives.”

Templeton emphasized that gifts can still be made to any of the 10 projects.