Tonight at the Wright Features Tribute Concert to R.W. Blackwood and Bill Lyles 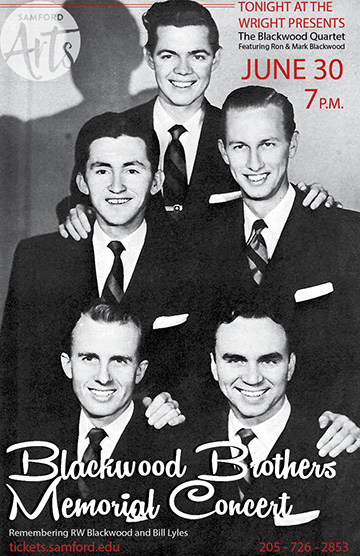 ﻿On June 30 at 7 p.m., Samford University’s Wright Center will host members of one of the royal families of gospel music, the Blackwoods. This special concert will honor the memory of R.W. Blackwood and Bill Lyles, who were killed in a plane crash near Clanton, Alabama, in 1954. Mark Blackwood and the Blackwood Quartet will perform. R.W.’s son, Ron, and Bill’s son, Bill Jr., will be in attendance.

Members of the Blackwood family will greet audience members after the concert.

Wright Center director Kenny Gannon commented on this interview that Bill Gaither did with James Blackwood some years after R.W. died.

“It's quite powerful,” Gannon said. “You will see that the wounds remained fresh all those many years later. In the moments and days after the crash, still reeling from the loss, he said that he would never sing again. You will hear in the interview how he changed his mind. Gospel music lovers like me are so glad he did. He credits the late Jake Hess with saving his life that day.”

The Statesmen and the Blackwood quartets were performing together and were all witnesses to the accident.