A group of family and friends gathered recently as Samford University alumnus John Wyatt’s portrait was unveiled in a short ceremony held at Brock School of Business.
Published on June 6, 2017 by Kara Kennedy   Share this on: 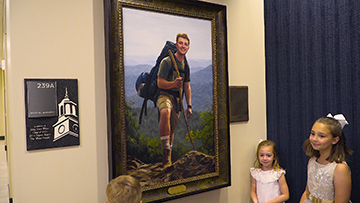 A group of family and friends gathered recently as Samford University alumnus John Wyatt’s portrait was unveiled in a short ceremony held at Brock School of Business.

Wyatt, a 2001 alumnus of the business school, died unexpectedly in a plane crash in August 2015. The portrait of Wyatt hiking the Appalachian Trail hangs in the break-out room that was dedicated to his memory in September 2015. Wyatt hiked the trail with college friends while attending Samford.

The portrait is in 239A Cooney Hall.

After Wyatt’s two children and niece and nephew unveiled the portrait, his sister, Jennifer Wyatt Carter, spoke for the family and mentioned how grateful they were to have a special room dedicated to her brother’s memory during the ribbon-cutting ceremony for the new business school building.

“We were shocked and overwhelmed with emotion at the ribbon cutting of this building in 2015 when we were told that Samford’ board of trustees had unanimously voted to dedicate a room in John’s memory in the new Brock School of Business,” Carter said. “We thank them for their magnanimous tribute to John and for recognizing his sincere interest in the business school.”

The oil painting was commissioned by the Wyatt family with the help of a gift from family friend and Samford alumna Mary Louise Hodges and the estate of the late A. Gerow Hodges. It was painted by Jamie Lott Wilson, who began commissioned artwork in 2009. Wilson estimated that she spent more 500 hours on Wyatt’s portrait. Before she decided on how Wyatt would be portrayed, Wilson talked with the Wyatt family and went through many photos with them as they collaborated.

“John’s mother, Mary, wanted something less traditional,” Wilson said. “There were so many ways that we could have shown him. He was a businessman, a builder, a father, Samford alumnus and a man of many hobbies. He loved outdoor activities like hunting, fishing and hiking. We considered a lot of fishing and hunting images, but the hiking image was one the family felt really expressed his personality.

“I also loved so many components of that image and thought that it would make a really beautiful portrait.”

One of the issues Wilson had to overcome was that Wyatt was wearing sunglasses in the photo, so she referred to a more recent photo to paint his facial features.

When she began working with the family, Wilson discovered that she had attended Hoover High School with John.

“John’s portrait became very meaningful to me after getting into the process of painting it,” she said. “I felt this very personal connection with the painting because of my personal connection with John. I liked the hiking photo when we first chose it but fell in love with it the longer I worked on the painting. The visual components of the painting became spiritually symbolic to me, and I thought it was really fitting for a posthumous portrait. Hikers carry walking sticks that aid in their journey up the mountain. If we are wise enough to bring the Lord with us as our shepherd, he can provide the same strength, endurance and stability as we travel life’s bumpy road.”

Kara Kennedy is director of marketing and communication for Brock School of Business.