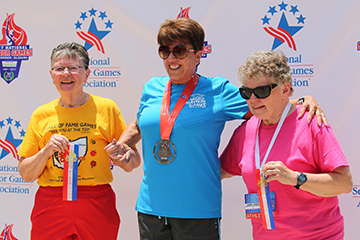 Samford University is one of several Birmingham-area locations taking part in the United States Senior Games, also known as the Senior Olympics, by hosting tennis and track and field events.

“Samford faculties are great,” Harring said. “It’s exactly the type of track I wanted to run on.”

High jump, long jump, pole vault and discus are among other field events at Samford’s Track and Soccer Stadium with more than 1,400 participants. Among those participants, D. Paul Miller, age 100, stood out as a winner in the discus throw. Miller has competed in every Senior Games since 1982.

“I love the games, and I try my best to compete every year,” said Miller. He thinks Samford’s Track and Field Stadium is a “fabulous facility,” one of the best facilities he’s competed in. Miller was also thankful for not having to walk far from the parking lot to the stadium.

The Senior Games is exactly like the World Olympics, but athletes range from 50 to more than 100 years old. The National Senior Olympics Organization (NSOO) was founded in 1985 and held its first games in 1987. Since its creation, participation numbers have rocketed to more than 10,000 with 19 sports represented. Sports include Olympic events such as swimming, cycling and volleyball, to other sports such as racquetball, bowling and horseshoes. The National Senior Games are held every two years and is the largest multisport event in the world for seniors.

Silver medal winner in hammer throw and high jump John Poche said, “The best thought process of the games is suit up, show up, do the best you can, and see how it comes out.”

All Senior Game events are free and do not require a ticket. The expected crowds for the events this month are near 15,000.

Samford’s involvement with the Senior Games has garnered national media attention, including a photo on page 2 of the June 10 issue of The Wall Street Journal.

The next Senior Games will be held in Albuquerque, New Mexico, in 2019.