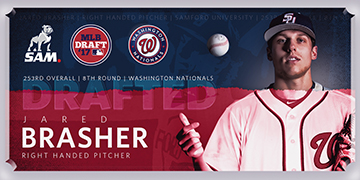 Samford’s Jared Brasher was drafted in the eighth round by the Washington Nationals, while Kevin Williams Jr. was taken in the 13th round by the Los Angeles Angels,and T.J. Dixon was selected by the Minnesota Twins with the first pick in the 24th round.