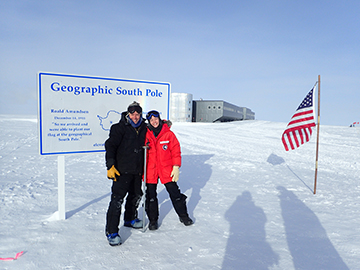 Samford University alumnus Brett Baddorf is spending his winter in a rather cool way.

Baddorf and his wife, Sarah, have spent the past five months at the South Pole and will spend a total of 10 months in Antarctica. With Baddorf at the South Pole, Samford now has alumni on every continent in the world.

The South Pole Station where the Baddorfs are living and working is one of three stations operated by the National Science Foundation (NSF). The site supports unique projects ranging from cosmic observations to seismic and atmosphere studies.

Baddorf was a religion major, and ran cross country and track before graduating in 2003. He became a Christian as a student at Samford one night in Pittman Hall. From then, the decision became clear to Baddorf that he wanted to be a religion major and spend his life as a Christian minister.

“Everything changed from that night in Pittman Hall. God reached into my heart and claimed it his own,” he said.

In response to how he believes Samford helped him get to where he is now, Baddorf thanked many professors from his department such as Sigurd Bryan, James Barnette, David Bains, Paul Holloway, Penny Marler and Kenneth Roxburgh.

“Their lectures inspired a deeper faith and helped discern a lifelong calling into the ministry. Their open-door policy allowed for countless conversations, leading to the direction in choosing a seminary, mentoring and countless other benefits.” Baddorf said. “The encouragement and guidance of my professors during my Samford days have given me the confidence and wisdom I have needed every step of the way since graduation.

“I think the best thing I learned at Samford  was to be open to what God is doing in the world.”

In a message written earlier this year, Baddorf compared the summer heat of his hometown Memphis, Tennessee, with the winter in Antarctica.

“Sarah actually prefers the cold winter of the South Pole to the hot summer of Memphis. She is fond of saying, ‘Minus 90 degrees in dry Antarctica is more comfortable than a positive 90 degrees in humid Memphis.’ And this is coming from a girl who generally prefers a warm climate to a cold one.”