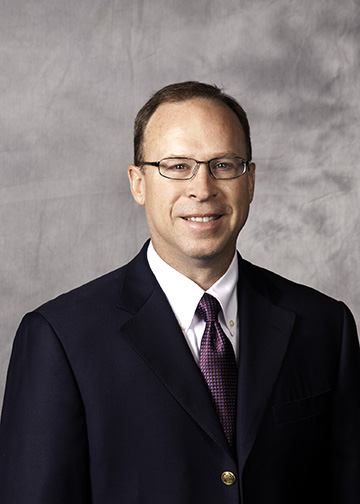 A Samford University alumnus and Birmingham-area pastor has been selected to lead a new Christian ministries academic program being developed by the university. Scott Guffin, a 1988 Samford graduate, will become executive director Aug. 14. He had been pastor of Liberty Park Baptist Church in suburban Vestavia Hills since 2004.

The program, which has been in discussion and planning for several years, will be housed in the university’s School of the Arts, where the worship and the arts concentration already is located, according to Samford Provost J. Michael Hardin.

The planning had reached a stage where full-time leadership was needed to move the project forward. Guffin’s first year will focus on collaborating with other areas on campus to fully develop the program.

Hardin emphasized that the program will go through the university’s regular review process and be presented to the board of trustees for approval.

The new program will benefit from the worship and the arts experience that Samford has had for several years, and meets a growing academic need that is in high demand, Hardin noted. It will build on the collaborative and interdisciplinary models found in the School of the Arts and other areas of the campus. The religion department will provide strong academic support for the new initiative.

School of the Arts Dean Joseph Hopkins said the new degree program will prepare young adults to serve in vocational ministry, learning to use their gifts in evangelism, missions, disciple-making, outreach, worship and service. It also will be designed to guide students into seminary or other graduate studies.

“Scott has a unique perspective as one who has been engaged in local church ministry for three decades,” Hopkins said, “but he also has the respect of the academic community through his meaningful work in scholarship. His ministry is a great model for others through his intentional work in the areas we want to emphasize.”

The interdisciplinary nature of the program will involve multiple academic units on campus and drew support from Beeson Divinity School Dean Timothy George.

“I wholeheartedly support the development of a well-designed undergraduate Christian Ministry Program on our campus,” George said. “An academically sound program, one based on the authority of Scripture and an explicit Christian worldview, will help a new generation of students to face the difficult cultural and moral challenges of our world.

Guffin has a Doctor of Philosophy from the Southern Baptist Theological Seminary, Louisville, Kentucky. His major areas were evangelism and church growth with minors in New Testament and missiology. In addition to his recent pastorate, he has served on other church staffs in Alabama, Indiana and Kentucky. He has been an instructor in Samford’s Ministry Training Institute and a ministry supervisor for Samford’s Beeson Divinity School. He also has served on the university’s Board of Ministerial Mentors and was chair in 2015–16. He has been active in denominational service on the local, state and national levels, and has guided multiple missions and ministry projects in the United States and internationally.

Guffin, who is a native of suburban Gardendale, Alabama, is part of a multigeneration family with Samford ties. His grandfather served on the university staff, and his late father, Truett, served as a Samford trustee for many years. His son is a recent Samford graduate, and his daughter is a current student.
Samford is a leading Christian university offering undergraduate programs grounded in the liberal arts with an array of nationally recognized graduate and professional schools. Founded in 1841, Samford is the 87th-oldest institution of higher learning in the United States. The Wall Street Journal ranks Samford 1st nationally for student engagement and U.S. News & World Report ranks Samford 66th in the nation for best undergraduate teaching and 104th nationally for best value. Samford enrolls 5,683 students from 47 states and 19 countries in its 10 academic schools: arts, arts and sciences, business, divinity, education, health professions, law, nursing, pharmacy and public health. Samford fields 17 athletic teams that compete in the tradition-rich Southern Conference, and ranks 6th nationally for its Graduation Success Rate among all NCAA Division I schools.
Director of Communication
Holly Gainer
Hgainer1@samford.edu
912-344-8443