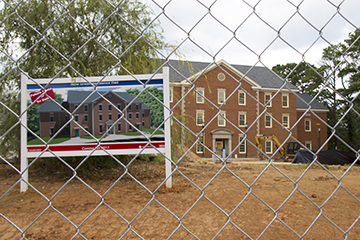 The goals of the campus master plan include providing a superior teaching and learning environment, improving space utilization, space management and effectiveness of existing schools and programs, focusing on enhanced student success, and alignment with Samford’s strategic plan, according to Kimberly Brown, Samford’s associate vice president for operations and campus initiatives.

Residence Hall Improvements
This summer, approximately 40 bathrooms are being remodeled, the popcorn ceiling is being removed in the Sigma Nu house, and bath and kitchen cabinets are being replaced in some Beeson Woods residences.

New Construction
The construction of a new 70-bed Delta Delta Delta residence facility in West Campus remains on schedule for completion this summer and is slated for occupancy in August.

A new paved and lighted pedestrian walkway is being installed between West Campus and West Village this summer.

Renovations and Relocations
The first phase of renovation for Howard College of Arts and Sciences is underway in Russell Hall and will be completed Aug. 1. This will be the new home for world languages and cultures.

In August, the philosophy, sociology and religion departments will move out of Burns and Chapman Halls into the space vacated by world languages in Dwight Beeson Hall so that Burns and Chapman Hall renovations can begin. When complete in summer 2018, Burns, Chapman, Ingalls and Russell will be the new home for Howard College of Arts and Sciences, including the departments of history, religion, classics, philosophy, English, mathematics and computer science, world languages, psychology, political science, geography, and sociology.

Ingalls Hall ground floor and first floor will be renovated concurrently with Burns, Reid and Chapman Halls, and will serve as a central location for many student services. This space will be the new home of admission and student financial services.

The Rotunda Club, and Dwight and Lucille Beeson Center rotunda are getting a much-needed face-lift with new paint, carpet, tile, furnishings and fixtures. This work will conclude in November 2017.

The third floor of Samford Hall is undergoing renovations to create space for general counsel, business affairs, institutional research, and other administrative and academic affairs functions.

Acoustics are being improved in Pete Hanna Center with installation of sound-absorbent materials in the rafters. This work begins July 28 and conclude in August.

Wright Center is being evaluated for ADA enhancements, as well as dressing room improvements.

Plans are underway to relocate public safety and emergency management into Seibert Hall. This will enhance the space needed for their function and enable more dedicated student space in the University Center.

Sustainability Initiatives
The Campus Infrastructure Improvement Plan is moving forward with nearly 1,200 new windows installed. Window installation is now complete, and new lighting, sanitary fixtures and weather stripping continue to be installed across campus. This $31 million project is expected to bring $51 million in energy savings to Samford over the next 20 years.

To follow campus master plan projects, go to samford.edu/campus-master-plan. To keep up with sustainability initiatives, go to samford.edu/sustainability.
Samford is a leading Christian university offering undergraduate programs grounded in the liberal arts with an array of nationally recognized graduate and professional schools. Founded in 1841, Samford is the 87th-oldest institution of higher learning in the United States. The Wall Street Journal ranks Samford 1st nationally for student engagement and U.S. News & World Report ranks Samford 66th in the nation for best undergraduate teaching and 104th nationally for best value. Samford enrolls 5,683 students from 47 states and 19 countries in its 10 academic schools: arts, arts and sciences, business, divinity, education, health professions, law, nursing, pharmacy and public health. Samford fields 17 athletic teams that compete in the tradition-rich Southern Conference, and ranks 3rd nationally for its Graduation Success Rate among all NCAA Division I schools.
Director of Communication
Holly Gainer
Hgainer1@samford.edu
912-344-8443