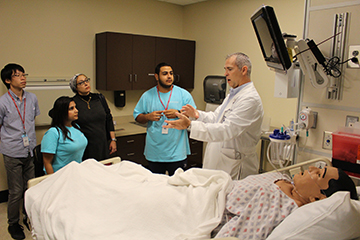 Samford University’s McWhorter School of Pharmacy hosted its fourth annual International Pharmacy Scholars Conference this summer. Pharmacy students from all over the world gather at the conference to study concepts of clinical pharmacy and patient care in the United States. This year, 30 students and pharmacists in attendance represented universities in Egypt, Iraq and Japan.

The 10-day conference was held in the new College of Health Sciences building. Students participated in a variety of lectures and simulation labs taught by McWhorter School of Pharmacy professors. They also made site visits to local pharmacies.

Amir Ezzat is a pharmacy student from Misr International University in Cairo, Egypt. Ezzat had never worked with simulation technology before attending the conference. “First, I was shocked,” Ezzat said. “The simulation room was exactly like a real hospital. The mannequin was talking to us, and its blood pressure was going like in a real human.”

During the simulation portions of the conference, professors used microphones to communicate through speakers in the mannequins and describe hypothetical symptoms. The students then had to address the patient’s symptoms.

Through the simulation, students practiced patient interaction skills as well as technical skills required to diagnose and treat a patient. Students also had the opportunity to inject the mannequin with medicines and observe the medicine’s effects on the patient’s vitals displayed on the screen.

According to Michael Hogue, professor and associate dean of Samford’s Center for Faith and Health, the international students are often surprised to learn how involved pharmacists are in direct patient care responsibilities in the United States. Patient care is heavily emphasized at the conference, as it is a distinctive feature of American pharmacy practice.

According to Shinya Makino, a pharmacy student from Meijo University in Nagoya, Japan, Samford professors were notably caring and intentional throughout the conference. Makino was surprised at the amount of one-on-one interaction students had with professors. “My learning experience here was very personal,” Makino said. “I enjoyed being able to talk to the professors and get to know them.”

Hogue said, “We hope that our scholars will sense the significance of the caring component of pharmacy beyond the basic science foundations which most associate with the profession.”

In addition to learning about the patient care element of pharmacy, students gained valuable knowledge about many imperative topics facing the global pharmacy community. Professors gave lectures on topics such as hypertension, diabetes, infectious diseases and more.

In 10 days, the students formed international relationships and exponentially expanded their understanding of the pharmacy profession. Hogue said, “Professors pour themselves into these scholars for the time they are here. The new relationships that form after such a short time are a serendipity of the conference.”

This distinctive conference welcomes an invaluable opportunity for global engagement that ultimately works toward the betterment of the international pharmacy community, and the health and well being of humanity.

Olivia Halverson is a journalism and mass communication major and a news and feature writer in the College of Health Sciences.