Published on July 20, 2017 by Mike Howell with Betsy Dobbins and Sean Flynt   Share this on: 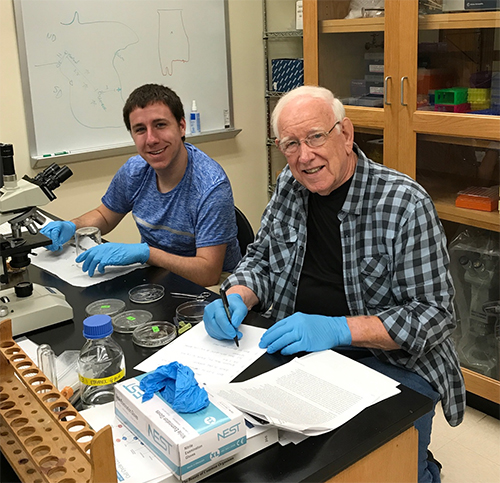 A Samford University research project adds to compelling evidence that a chemical produced by the henna plant might be useful in treating cancer and offers insight into appropriate dosage.

Twelve students from undergraduate institutions across the United States are at Samford this summer, taking part in a prestigious Research Experience for Undergraduate (REU) program funded by the National Science Foundation (NSF) and hosted by the university’s Department of Biological and Environmental Sciences. They are investigating questions in local ecology, microbiology, genetics, enzymology, cell culture, organic molecule synthesis and thin film macromolecules. Each student is developing specialized and marketable skills while learning to communicate about science research.

One of the students, Mark Lueders, a sophomore from Minnesota State University Moorhead, worked with Samford professor emeritus Mike Howell to investigate lawsone, a chemical produced by the henna plant. Humans have used henna for more than 9,000 years as a cosmetic and dye, but scientists are focused on lawsone’s potential to protect against cancer, leukemia, inflammation, bacteria, fungal infections, arterial fat and high blood sugar.

Lueders was primarily interested in lawsone’s anti-cancer properties. Recent research suggested that the chemical halted fast-growing cells such as those in many cancerous tumors, but was not harmful to cells that were growing normally. Lueders and Howell used onion root tips to clearly demonstrate that lawsone is an anti-mitotic substance, which stops fast-growing cells from dividing. They also determined the dosage at which cell division may be stopped completely without immediate harm to adjacent normal cells. Although this work was done on onion cells, understanding dose effects is an important step in preparing for translation to anti-cancer research.

Lueders and Howell have submitted a paper on their research for publication in the peer-reviewed journal The International Journal of Plant Biology and Research.