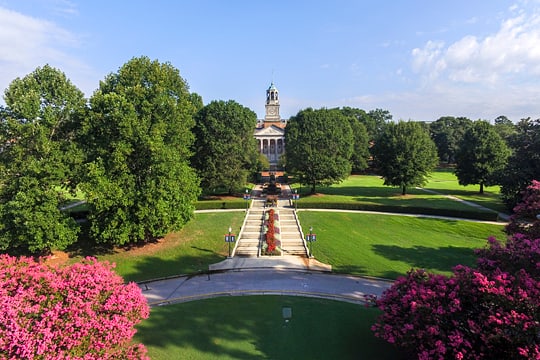 Samford University has announced it is voluntarily reducing its anticipated budget allocation from the Alabama Baptist State Convention to zero effective Jan. 1, 2018. The decision, which was approved by the Executive Committee of the university’s Board of Trustees, was the result of an ongoing dialogue among the senior leaders of the two organizations.

“I believe the action taken by our trustees is something that both parties have been anticipating for some time and will serve the best interests of both Samford and the Alabama Baptist State Convention,” said Samford President Andrew Westmoreland. “Our longstanding educational and ministry relationships with Alabama Baptists have always been more significant than money, and these relationships will continue and flourish.”

Samford was founded by Alabama Baptists in 1841. Since then, both the university and the state convention have enjoyed a mutually rewarding relationship which will continue, according to Samford’s president.

“The relationship between Alabama Baptists and Samford remains crucial to the mission of Samford and the ongoing work of Baptists in Alabama and Christians throughout the world,” Westmoreland said.

This will be the third time since 2008 that Samford has voluntarily reduced the annual funding it receives from the Alabama Baptist State Convention.

“Samford recognizes that gifts from churches to the Alabama Baptist State Convention are not keeping pace with the resources required to appropriately fund the convention’s operations and ministries,” Westmoreland said. “Although Samford is immensely grateful for the financial support of the convention, which we have carefully stewarded, we are also mindful of the valuable ministries that are dependent upon funds allocated through the Alabama Baptist Convention's annual budget.”

When the proposed student organization sought official university recognition, convention leadership informed Samford that “if the [Samford] trustees decide not to deny permanent recognition and revoke its provisional status, we will not recommend any allocation for Samford University in the 2018 budget.”

Acknowledging that the intent and purposes of the proposed student organization were widely misunderstood, Westmoreland advised the university’s faculty and other employees on July 7 that, even prior to receiving this communication from convention leaders, he already had determined that he would not seek formal recognition of the proposed student organization by trustees but would work to accomplish each of the group’s worthy goals.

In his message to employees, Westmoreland outlined his resolve to address topics related to human sexuality and “other important issues at the intersection of Christian understanding and cultural reality.”

“I will involve these students and others across campus in taking essential steps to create new and ongoing opportunities for robustly engaging these and other important issues,” he said.  “Our actions at Samford, irrespective of financial considerations, must demonstrate fidelity to God’s truth, abiding compassion and respect for all people, and solidarity with the timeless ideals of a strong university.”

Westmoreland emphasized that the university’s financial strength depends heavily on generous financial contributions from alumni and others. “We acknowledge that reducing reliance on financial support from the Alabama Baptist State Convention will require careful stewardship of the university’s resources, but I am confident of Samford’s ability to maintain financial integrity.”

Westmoreland added that Samford’s Board of Trustees and administrative leadership will be working with leaders of the Alabama Baptist State Convention “to provide for thoughtful and harmonious agreement upon principles and practices that will ensure effective cooperation throughout the years ahead.”

About Samford University – Samford University is a premier nationally ranked private university deeply rooted in its Christian mission. Founded in 1841, Samford is the 87th oldest institution of higher education in the United States. In 2017, U.S. News & World Report ranks Samford 4th among regional universities in the South and 3rd for a strong commitment to teaching. Samford enrolls 5,471 students from 47 states and 29 other countries in its 10 academic units: arts, arts and sciences, business, divinity, education, health professions, law, nursing, pharmacy, and public health. Samford also fields 17 NCAA Division I teams that compete in the tradition-rich Southern Conference.