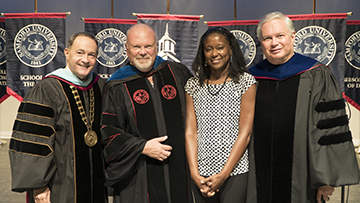 The award goes annually to an outstanding faculty member chosen by a student and faculty committee from nominees submitted by the graduating senior class. The award is named for a former longtime trustee of the university.

According to student nominations, Finn “knows what servant leadership is all about. He radiates the love of Christ, and he genuinely cares about [students].”

Finn, who has taught at Samford since 1998, specializes in children with autism spectrum disorders and more recently has worked with the needs of refugee families worldwide.

In announcing Finn’s selection, Samford Provost J. Michael Hardin said, “Students agree that his honest passion for education and special needs children is what has influenced them the most. His knowledge of the field of special education, both academically and practically, is evident through his lectures, classes and experiences in the community.”

Eilani Grayson, program coordinator for computer-based testing in McWhorter School of Pharmacy, received the Bill Nunnelley Award. The award recognizes outstanding job performance by a nonfaculty employee whose work regularly and consistently exceeds expectations, and reflects a high level of service, trustworthiness and respect. The award is named for a longtime employee of Samford’s news and communication office.

Grayson has worked in the pharmacy school since 2000 and assumed her current role in 2015 when the school adopted a new computer-based testing platform. She also serves as administrative assistant for the Department of Pharmaceutical, Social and Administrative Sciences.

“The overall successful implementation of ExamSoft can be directly attributed to Eilani’s hard work and going above and beyond the call of duty,” said Bruce Waldrop, department chair.

Waldrop added that Grayson “exemplifies the mission, vision and values of Samford through her thoughtfulness, patience, caring attribute and willingness to help.”
Samford is a leading Christian university offering undergraduate programs grounded in the liberal arts with an array of nationally recognized graduate and professional schools. Founded in 1841, Samford is the 87th-oldest institution of higher learning in the United States. The Wall Street Journal ranks Samford 1st nationally for student engagement and U.S. News & World Report ranks Samford 66th in the nation for best undergraduate teaching and 104th nationally for best value. Samford enrolls 5,683 students from 47 states and 19 countries in its 10 academic schools: arts, arts and sciences, business, divinity, education, health professions, law, nursing, pharmacy and public health. Samford fields 17 athletic teams that compete in the tradition-rich Southern Conference, and ranks 6th nationally for its Graduation Success Rate among all NCAA Division I schools.
Director of Communication
Holly Gainer
Hgainer1@samford.edu
912-344-8443