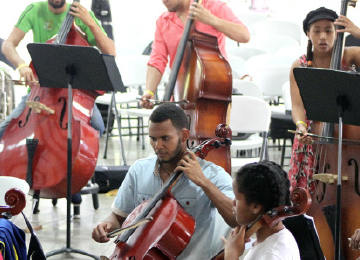 Will Featherston is a junior who plays clarinet in the Samford Orchestra. He spent spring break traveling with other Samford students and employees on a 10-day trip to the Dominican Republic. The trip impacted the 50 or so participants in different ways, but unexpected elements were a common theme.

“I was surprised by how spontaneous we ended up being,” said Featherston. “Flexibility was our mantra.” He said he especially enjoyed the opportunity to practice with a Dominican youth orchestra. “It was great to play with students close to my age and share techniques.”

Sarah Derrick, a junior music education major and music worship minor, echoed the surprising nature of the trip and found meaning by sharing Christ. “It was transformational for me,” she said. She shared a story of one church performance where language barriers disappeared thanks to music and worship.

Trip participants from Samford’s School of the Arts and the Department of World Languages and Cultures held public concerts, worked with the National Youth Symphony Orchestra, performed in churches, visited schools to teach children about music, and even found time for a mountain rafting trip.

The trip was led by Samford’s orchestra director, Brian Viliunas, who initiated the tour several years ago based on his experience with the Youth Orchestra of the Americas that traveled globally on goodwill missions. This was Samford’s second tour, and the intent is to allow students two opportunities to participate during their time at Samford. The relationship with the Dominican Republic developed through fellow faculty member Jeff Flaniken and his contacts. The success of the trip relied on the assistance and coordination of local pastor and musician Hector Santana.

“The first trip was a typical orchestra tour, but having developed this relationship with the local cultural organizations and ministry has made the experience so much more meaningful,” said Viliunas.

Successful collaboration among different disciplines was a key component of the trip. Mike Ledgerwood, professor of romance languages and linguistics, accompanied the trip along with three other interpreters from the world languages program, two students and faculty member Heather West. “The four of us were in constant demand as translators,” said Ledgerwood.

The group visited many schools and churches during the tour, setting up “instrument petting zoos” for young children.

“The hands-on experience [of the trip] was awesome in terms of music education,” said Derrick. “As a sophomore, I had not had the opportunity to work outside the classroom, and it was extremely beneficial to dive into a classroom setting.”

Grant Dalton, director of the jazz band, said, “Many students really learned to see themselves as music educators on this trip, and that was an exciting experience for me as their professor.” He felt students gained a new performance perspective as well. “Many ensemble members had never played to such large public audiences nor received the resounding affirmation for their craft. After our jazz concert in Colonial City, students felt it was the best performance of their lives, given the crowd’s enthusiasm.”

According to Viliunas, one of the most meaningful concerts took place at a small university on a Saturday morning. “It was on the fifth floor of a building that only had air conditioning on that floor, and over 1,200 students came. Most of the audience had never seen a traveling orchestra before, and I remember the sea of phones recording the concert. Even though the venue was sparse and rustic, Samford students were inspired by the significance of their performance.”

Ashley Smith is coordinator of marketing and communication for the School of the Arts.
Samford is a leading Christian university offering undergraduate programs grounded in the liberal arts with an array of nationally recognized graduate and professional schools. Founded in 1841, Samford is the 87th-oldest institution of higher learning in the United States. The Wall Street Journal ranks Samford 1st nationally for student engagement and U.S. News & World Report ranks Samford 37th in the nation for best undergraduate teaching and 97th nationally for best value. Samford enrolls 5,758 students from 48 states and 22 countries in its 10 academic schools: arts, arts and sciences, business, divinity, education, health professions, law, nursing, pharmacy and public health. Samford fields 17 athletic teams that compete in the tradition-rich Southern Conference, and ranks 3rd nationally for its Graduation Success Rate among all NCAA Division I schools.
Director of Communication
Holly Gainer
Hgainer1@samford.edu
912-344-8443