Published on August 3, 2017 by William Nunnelley   Share this on: 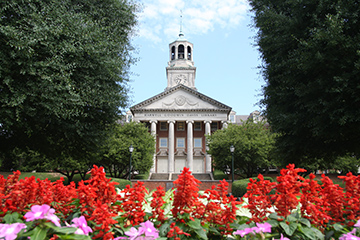 BIRMINGHAM, Ala. -- Samford University is the top-ranked higher education institution in Alabama, according to new national rankings released Aug. 3 by Forbes Inc. In the respected annual publication, Samford is ranked ahead of all other public and private colleges and universities in the state of Alabama.

Now in its 10th year, the Forbes Top Colleges ranking involves “return-on-investment-centric logic: and a thorough assessment of key educational outcomes, including superior return on investment, leadership and success, and the student-consumer experience,” according to Forbes. Samford is ranked #182 of the 650 colleges and universities included in the annual ranking.

“These rankings further affirm Samford’s value, affordability and academic stature,” said Samford President Andrew Westmoreland. “We acknowledge that these types of rankings can be subjective from year to year, but also a great source of pride for Samford students, employees and alumni who celebrate the strong national reputation of their university.”

The Forbes Top Colleges ranking has always emphasized the importance of postgraduation success. According to Forbes, “The most direct return on investment a student can earn from a college education is postgraduate success. A high-paying or high-impact career largely justifies four years of academic work and tuition bills, so we continue to make this sector our highest priority.” Samford places heavy emphasis on career counseling and preparing its students for success upon graduation. The university continually monitors and reports on the placement of its recent graduates. In recent years, 97% of all undergraduate alumni have been employed, enrolled in graduate school or pursuing postgraduate internships within six months of graduation.

Samford continues to be nationally ranked for academics, affordability and value by a variety of other major rankings, including U.S. News & World Report, The Economist, Kiplinger’s Personal Finance and The Wall Street Journal.

Samford University is a premier nationally ranked private university deeply rooted in its Christian mission. Founded in 1841, Samford is the 87th-oldest institution of higher learning in the United States. In 2017, U.S. News & World Report ranked Samford #4 among regional universities in the South and #3 for a strong commitment to teaching. Samford enrolls 5,471 students from 47 states and 29 countries in its 10 academic units: arts, arts and sciences, business, divinity, education, health professions, law, nursing, pharmacy, and public health.