From Performing at Parliament to Working at a Ugandan Orphanage, Samford Students, Teachers Travel Abroad to Learn and Serve 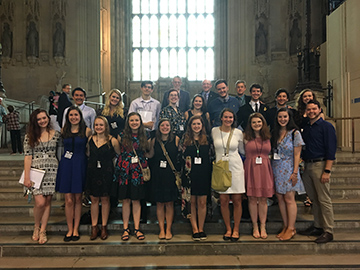 An ensemble group of 19 Samford University theatre students stood front and center in the British Houses of Parliament Aug. 23 to present a reading of The Somerset Case, a play about an 18th-century slave who was freed by the British courts in a dramatic case. Samford associate professor of theatre Mark Castle wrote the play.

The story explores the case of James Somerset, a slave brought to England in 1769 by his American owner who escaped, was recaptured and ultimately freed by the courts because in that era, no laws existed in England to make a person a slave. The date for the reading was chosen because Aug. 23 is the UNESCO International Day of Remembrance of the Slave Trade.

“I hope that the experience of students reading a great true story in the actual location [in which] it took place will ground for them the idea that the work we do has significance,” said Castle, “not just in a fleeting, ephemeral way at the moment of performance, but that it is connected to the great stream of presentations that have influenced kings and commoners alike to moments of realization.”

Prior to the Parliament reading, the students attended the Edinburgh Festival Fringe, the world’s largest arts festival, where they presented The Curious Savage by John Patrick.

“Study abroad is a life-changing experience for many students, opening their eyes to different ways of life, and promoting understanding and tolerance,” said Lauren Doss, director of global engagement at Samford. “It allows students to develop and expand their personal, academic and professional goals, equipping them for today’s global society.”

“Being immersed in the society provides a different perspective of the culture you are studying, as well as your own, that is unattainable from reading about it in a textbook,” said Chandler.

“We studied how British government works,” said student Wimberly Underwood, who took Chandler’s course. “This trip and class gave me a more rounded understanding of how a government so different from ours works, and works well. We were able to meet with government groups and activist groups.”

Underwood called London “an incredible experience,” and said touring Parliament and learning about its customs and traditions was her favorite part.

In addition to students taking course work in international settings, more than 70 students served in mission and ministry programs in other nations. Sydney Berry was one of these. She worked at the Good Shepherd’s Fold Orphanage in Uganda for two months.

“Watching and listening defined my time serving in Uganda,” she said. “The missionary families at Good Shepherd’s Fold, and the 76 orphaned and destitute children in their care challenged and blessed me in more ways than if I had stayed only a week.

“Living amongst Ugandans for eight weeks showed me that my Western type-A way of life is not the only way to live, but that the all-knowing, personal God that we believe in is the same both in America and all the way across the Atlantic in Uganda.”

Student Luke Ellerman used a Global Missions scholarship to work for eight weeks in Chiang Mai, Thailand, for Business as Missions, which trains businesses and business leaders to use their platforms to share the Gospel. “This allowed me to intertwine my major (entrepreneurship) and my passion for international missions,” he said. He called the experience “tremendously beneficial.”
Samford is a leading Christian university offering undergraduate programs grounded in the liberal arts with an array of nationally recognized graduate and professional schools. Founded in 1841, Samford is the 87th-oldest institution of higher learning in the United States. The Wall Street Journal ranks Samford 1st nationally for student engagement and U.S. News & World Report ranks Samford 37th in the nation for best undergraduate teaching and 97th nationally for best value. Samford enrolls 5,758 students from 48 states and 22 countries in its 10 academic schools: arts, arts and sciences, business, divinity, education, health professions, law, nursing, pharmacy and public health. Samford fields 17 athletic teams that compete in the tradition-rich Southern Conference, and ranks 1st nationally for its Graduation Success Rate among all NCAA Division I schools.
Director of Communication
Holly Gainer
Hgainer1@samford.edu
912-344-8443