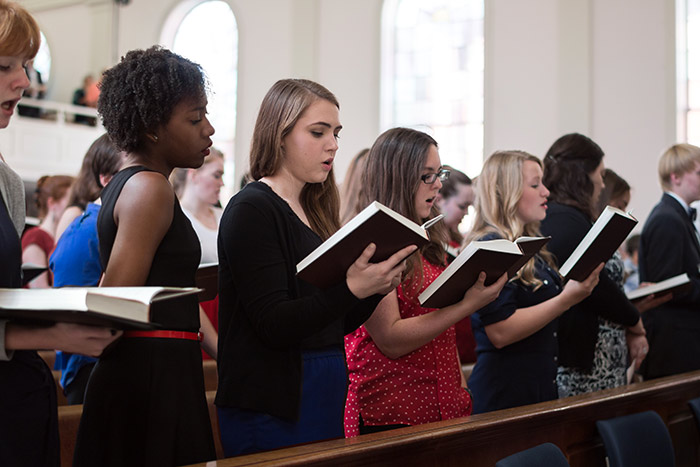 The annual Samford University Hymn Sing has become a beloved tradition in the community. The hymn sing is the spiritual culmination of Samford’s Family Weekend festivities, sharing favorite hymns with family and friends.

Celebrating its 14th year, the annual hymn sing is at 2 p.m. on Sunday, Oct. 1, and will take place off campus at First Baptist Church of Birmingham, 2209 Lakeshore Drive, due to the renovation of Samford’s Reid Chapel. The church is located near the university campus.

Under the musical leadership of Joe Hopkins, dean of the School of the Arts, Eric Mathis, associate professor of music and worship, and Emily Andrews, instructor of music and worship, the congregation will share fellowship and singing of hymns selected by the audience. They will be accompanied by Anna Williams, long-time pianist at First Baptist Church in Montgomery, Alabama, and Hunter Goff, organist at Birmingham’s Briarwood Presbyterian Church. The Samford University Chorale will perform two arrangements as part of the program.

Mathis notes, “We are especially excited to have family members of two of our senior music and worship majors participate this year. Reid Parrot and his grandfather Gerald Ray, known for his long running tenure at First Baptist Church in Houston and as a host of hymn sings through Gerald Ray Ministries, and Jake Adler and his parents, Linda and Michael Adler, worship pastor for Shades Mountain Baptist Church, will provide interludes to the hymn singing with hymn arrangements of their own.”

According to Hopkins, “The Hymn Sing is one of the high points of the year. Voices from our community raised together- all generations, students, parents, grandparents and children singing together songs of faith. We are especially grateful to the First Baptist Church for hosting the event this year while Reid Chapel is under renovation.”

The Hymn Sing began in 2003 as the Samford Auxiliary’s (now Legacy League) opening program of the year. It featured the music of composer Philip Paul Bliss, who had been described as “one of God’s gifts to modern Christian music,” and was directed by legendary gospel musician Dick Baker of Dallas, Texas. The program was so popular that it has become a Samford tradition and the closing event of the annual Family Weekend.