Published on September 25, 2017 by Maryellen Newton   Share this on: 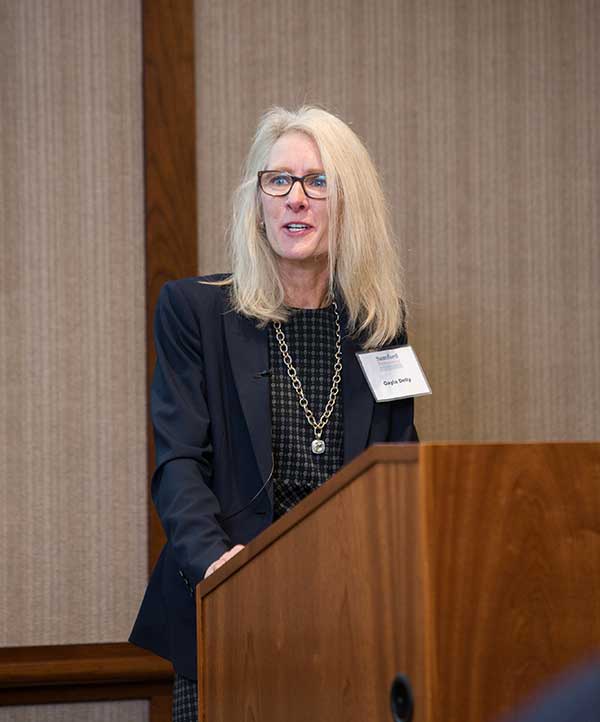 “One of the most important things I believe you have to do is to grasp the importance of creating an environment for success,” was just one piece of advice Gayla Delly offered to over 100 business students and professionals as the keynote speaker to the Samford Professional Networking breakfast Sept. 22.

Delly, a 1980 Samford University graduate, spoke of her experience throughout different jobs in her career that spanned more than 25 years, 19 of which were spent with Benchmark Electronics.

Gradually, she climbed through the ranks within the company, coming to hold positions of chief financial officer, president and chief executive officer.

Throughout the breakfast, Delly provided words of encouragement. She started by suggesting strategic goal setting.

“You have to make sure it’s something you’re willing to invest your time and effort into,” she said. “You have to be willing to endure some hardships, failures, setbacks and get up and do it again.”

When Delly first joined Benchmark, they had two offices and 1,400 employees. Once she retired in September 2016, the firm had more than 10,000 employees across seven countries.

Delly admitted people would always ask her, “Samford and not Stanford?” with regards to how she had prominent positions in a large company in a major city. To this remark she said, “Nobody [at Samford] ever told me I couldn’t.”

She quoted Eleanor Roosevelt and Condoleezza Rice, then offered a final word of advice. “You have to willing to commit yourself, to put yourself out there and to work hard.”