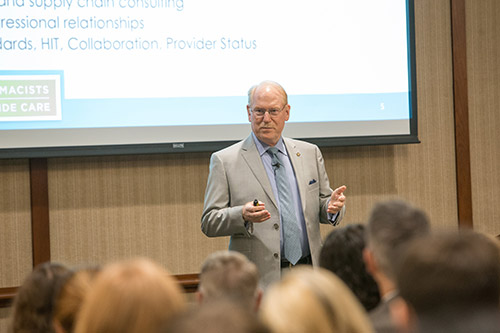 The series was created by McWhorter School of Pharmacy Dean Michael Crouch to bring national thought leaders to Samford’s campus to speak on contemporary topics related to health care and the profession of pharmacy.

“I’m very thankful for Mr. Menighan’s advocacy and endless support of the bill currently under review by the U.S. congress titled, ‘Pharmacy and Medically Underserved Areas Enhancement Act.’ This bill if passed would amend the Social Security Act and allow for Medicare coverage and payment for certain pharmacist services. With this in mind and the fact that we’re currently celebrating American Pharmacists Month I can’t think of a better person to speak to our students and share his advocacy experience,” Crouch said.

While many paths can lead to advocacy, Menighan began his lecture by sharing the most important one. “If you want to be effective in persuading someone, you have to start with relationships,” he said.

Advocacy can take place amongst strangers, but Menighan encourages students to take their work a step further. “Sometimes, you have to be personal to make people listen. It has to connect with your community, your family or your faith,” he said.

Menighan quoted a phrase he said he often heard early in this career, “You can accomplish anything you want if you don’t care who gets the credit.” This is easier said than done, Menighan explained.

“As a national association, we work really hard to represent the interests of all pharmacists in all practice settings—from academic to industry, long-term care to specialty and community pharmacies. When we open our mouths or write a letter on an issue, we have to think about all of them,” Menighan said. “We are not representing one sector against another, so it is important we think about these issues carefully.

Despite the obstacles that may stand in the way, Menighan simplified his advice for students to a single sentence. “At the very least, keep showing up,” he said. “I think you will find that it will always pay off for you.”