Published on October 18, 2017 by William Nunnelley   Share this on: 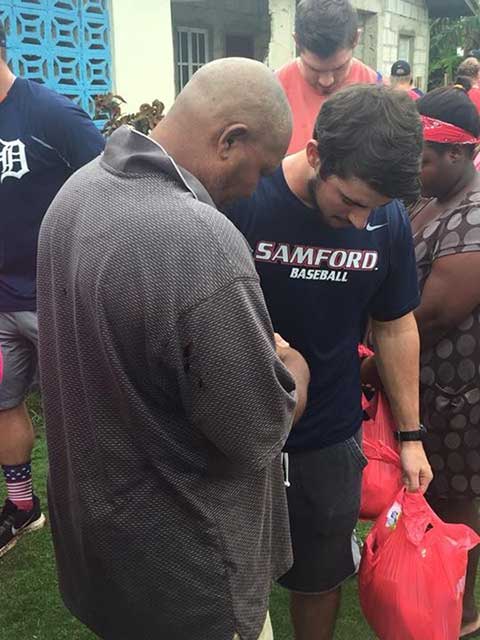 The Samford University baseball team had what player Greg Mula described as “a life-changing, eye-opening experience” during fall break in early October. Coach Casey Dunn and his team flew to the Dominican Republic for a quick missions trip packed with dozens of experiences.

Arriving on a Friday, the Samford group visited the Pasitos de Jesus ministry in Boca Chica, a home operated by Dalma Florian for 40 young girls. Members of the Samford group shared their stories of accepting Christ. “Many of our guys will tell you the time at Pasitos was the most impactful part of their trip,” said Dunn.

On Saturday morning team members worked with 200 boys at a youth sports clinic, then played an exhibition game against Santa Fe, a Dominican minor league team. After the game, Samford player Sam McWhorter gave his Christian testimony and throughout the day, the Samford students shared their faith and love of baseball with those they encountered.

The team attended a church service on Sunday. Several players told Dunn that even though they could not understand many of the words being spoken or sung, “they could feel the Lord’s presence in the room.” Later Sunday, Samford played another exhibition game against a local team whose members ranged in age from 14 to 45. Dunn thought he had played against some of the older players 20 years ago. He said the exhibition showed his players “just how much fun the Dominicans have playing the game.”

On Monday and Tuesday, Samford played other groups and continued to share their stories with everyone they encountered. Player Tristan Widra talked about his faith in the dugout of the Dominican team on Monday while heavy rain fell on the field, washing out the game. Player Luis Fuentes served as a translator throughout the trip.

“We bought and distributed groceries for 32 families that afternoon,” Dunn reported, “and spent time at an orphanage for boys.”

On the trip, Dunn said, “The students helped to change lives, even as their own lives were being changed.” Player Josh Rich predicted the experience would serve to bring the team closer together in the future.

As Samford President Andrew Westmoreland noted in his periodic report called Our Story, “The world is better because of Casey Dunn and the Samford baseball team.”