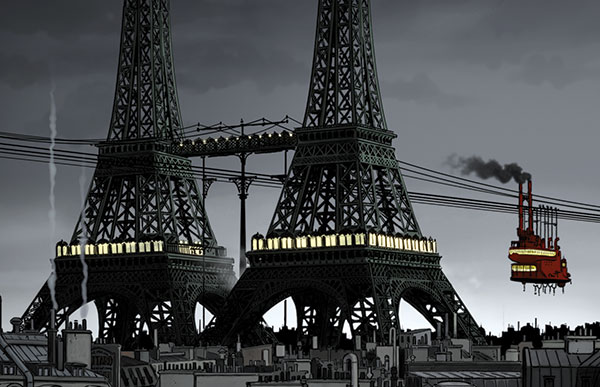 Samford University will host a festival of French film Oct. 30-Nov. 16 thanks to a grant from the FACE Foundation, which supports French-American Cultural Exchange in Education and the Arts.

Heather A. West, Assistant Professor of French and Director of Samford’s Critical Languages Program, secured the grant that makes it possible for the university to host the Tournées Film Festival for the second year in a row. The festival, featuring six recent French-language films, is scheduled to coincide with National French Week (Nov. 1-7) and International Education Week (Nov. 13-17). The free public screenings will be in Samford’s Christenberry Planetarium (see full schedule below).

Since 1995, the Tournées Film Festival has been held at over 600 American colleges and universities and has made it possible for over 500,000 students and community members to discover and enjoy French­-language films throughout the United States.

The festival takes an interdisciplinary approach to introduce French cinema to new audiences, including students who are not necessarily studying French or familiar with French culture. The films are presented in French with English subtitles.

This year, Samford’s Department of World Languages and Cultures is partnering with the Samford University Film Club and the Alabama chapter of the American Association of Teachers of French to host post-film discussions.

The Tournées Film Festival is also made possible with the generous support of the Cultural Services of the French Embassy in the U.S., Centre National du Cinéma et de l’Image Animée (CNC), the French American Cultural Fund, the Florence Gould Foundation and Highbrow Entertainment.

Samford convocation credit is available for the films.

An animated film with a dystopic, steampunk landscape where scientists have mysteriously disappeared for decades and where April Franklin, the brilliant young descendant of a long line of chemists, is in danger of being next. (Belgium, Canada, France, 2015)

A film which perfectly balances sharp observation of the harsh realities of the immigrant experience with an inspiring story of individual resilience. (France, 2016)

The first film by Senegalese master Ousmane Sembène and the first feature film produced in sub-Saharan Africa, Black Girl is the story of Diouana, an illiterate nursemaid from Dakar who follows her French employers to the Côte d’Azur with dreams of discovering France. But once in Antibes, she finds herself enslaved, trapped in the couple’s well-appointed holiday apartment and on the receiving end of their domestic frustrations. (France, Senegal, 1966)

In the Congo, passing the national baccalaureate exam can save a young person from a life of manual labor and open the doors to university and a career. As Congolese filmmaker Dieudo Hamadi’s documentary National Diploma so powerfully shows, the path to success in the national exam is full of challenges. (Congo, France, 2014)

In an act of desperation, Grigris, who has vowed to pay his gravely ill stepfather’s exorbitant hospital bill, joins an illegal gas-smuggling operation, setting off a chain of events that leads him to escape the city in fear for his life. (Chad, France 2013)

Marion Cotillard plays Sandra, an employee at a solar-panel factory in an industrial town in Belgium who took a leave of absence after suffering a bout of crippling depression. Although eager to return to work, the wife and mother of two young children is told that management is offering each of her colleagues a 1,000-euro bonus if they vote to make her redundant. (Belgium, France, Italy, 2014)