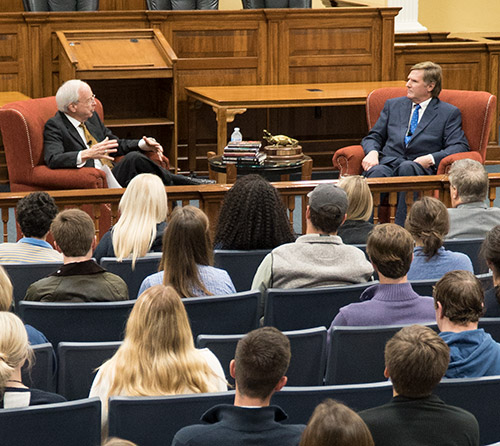 Papantonio is senior partner at the Levin Papantonio law firm in Pensacola, Florida.

In an interview setting with Cumberland School of Law professor John Carroll, Papantonio explained that he had no intentions of becoming an attorney after graduating with a degree in journalism until he met a prominent trial lawyer who told him he could have a huge impact as a trial lawyer. After he heard this, Papantonio attended Cumberland School of Law, where he graduated in 1981.

Since becoming an attorney, Papantonio has won numerous multimillion dollar cases, served as the President of the National Trial Lawyers and is one of the only living attorneys to be inducted into the Trial Lawyer Hall of Fame.

Apart from his trial work, Papantonio has been featured on numerous television and radio shows and currently hosts Ring of Fire, a radio program, as well as America’s Lawyer, a television show that investigates corporate and government corruption.

Papantonio is also an author of multiple motivational books, and most recently, a novel entitled Law and Vengeance, the sequel to his first novel, Law and Disorder. These books are dramatized versions of real cases, and the first book was about himself, he explained.

Papantonio also explained that he was motivated by the media to tell these stories, as this was the only platform where he was allowed the full freedom to share them.

Law and Vengeance features Gina Romano, a female attorney who grew up in a wealthy setting with a tough childhood, which eventually led her to become a prominent trial lawyer. Perhaps the most important quote from the novel, he says, is “The noblest revenge is to forgive.”

Papantonio is currently working on two more novels which will further the stories featured in his series.

Courtney Bobo is a student in Cumberland School of Law and a news and feature writer in the Division of Marketing and Communication.