Published on November 6, 2017 by Maryellen Newton   Share this on: 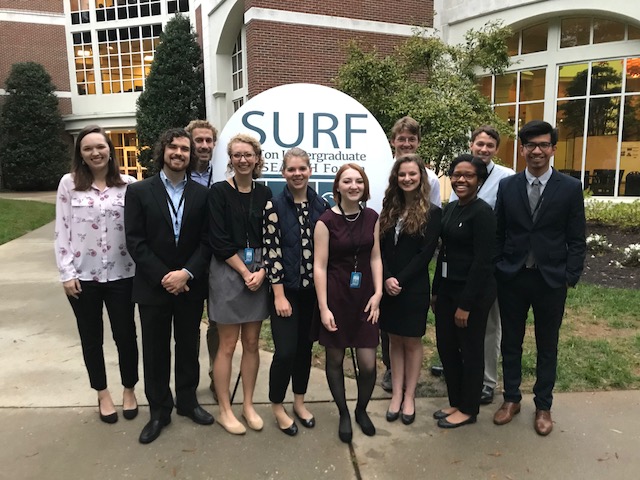 Mermoud was one of several Samford students presenting research for the first time in this type of setting. “It was a great opportunity to meet other students on Samford's campus that I wouldn't normally interact with because our majors are so different,” she said. “I was the only humanities student in Samford's group, so I got to learn a lot about other people's research in STEM or social sciences.”

Likewise, Beck said she had an amazing experience. “I really enjoyed being around like-minded people and seeing what my classmates and students from other schools have been researching,” Beck said. “It was great to have the opportunity to share my research and get feedback from other students and faculty.”

The SoCon invites up to 15 students from each of the 10 member schools to present original research in paper or poster form. Students are chosen based on nominations from faculty. In its second year, SURF works to support undergraduate research.

A student presented his or her research on a poster and stood with it in an auditorium, while attendees had the opportunity to walk around and ask questions. Some students also did oral presentations of their research to an audience.

“The SURF conference, in the last two years, has created an impetus on Samford’s campus to find a way to support undergraduate research at a higher level,” said Thomas Woolley, Samford’s senior associate provost.