Published on November 29, 2017 by Maryellen Newton   Share this on: 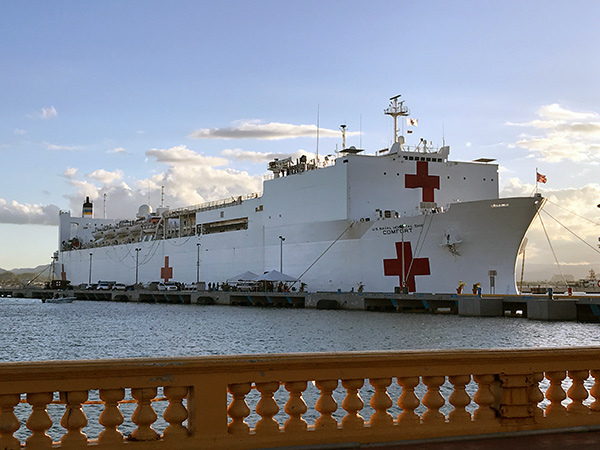 Following the devastation of Hurricane Maria, Samford University instructor Ronda Lacey with McWhorter School of Pharmacy traveled to Puerto Rico to provide medical aid to hurricane victims as part of the National Disaster Medical System under the U.S. Department of Health & Human Services. She is a Commander for the AL-1 National Disaster Medical System, having served since the Sept. 11, 2001, attacks.

As a leader of the disaster medical assistance team, Lacey spent 17 days in Puerto Rico. For the majority of those days, she was stationed in front of the USNS Comfort, a Mercy-class hospital ship with the U.S. Navy. She treated a broad range of patients, from minor injuries to gunshot wounds.

Many professionals were involved including physicians, nurses, pharmacists and logistics coordinators. Operating with their own power system, they essentially had an entire medical treatment facility.

One of the most astounding situations Lacey saw on her trip was a medical team handling back-to-back heart attacks successfully, making sure those two people remained alive.

“It was an incredible partnership, literally a once-in-a-lifetime honor to assist,” Lacey said. “These men and women that I had the honor of serving with, we all know we cannot participate in these missions without the tremendous support of our family and friends, and for that we are thankful.”

The days were long, and there was a language barrier, but Lacey said she would not trade that experience for anything. “Our troubles pale in comparison to what they have gone through,” she said. “The hugs we got more than made up for anything that was going on. To get a smile or a high-five from a child really makes your day.”

“The people of Puerto Rico were incredibly resilient,” she said. “They were the most patient people to have gone through what they did. They had tremendous hearts of gold. We look at them like family.”

The trip to Puerto Rico changed Lacey. She returned home with a better understanding of a different culture, humbled and honored to have been able to make the trip.

“Together we can make a difference, and I just have an honor of doing it through a disaster medical assistance team.”