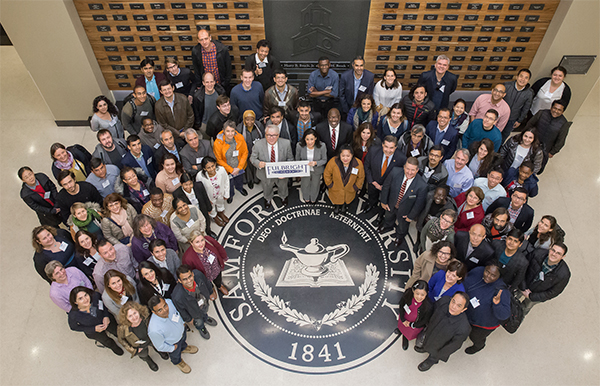 Samford University’s Brock School of Business and Cumberland School of Law hosted a group of scholars from 49 countries Nov. 30 in partnership with the Fulbright program, the flagship international educational exchange program sponsored by the U.S. government.

The scholars are living in the U.S. for up to two years as they pursue individual research projects under the auspices of the Fulbright program, which orients them to various aspects of American culture through a series of seminars. In 2014, Samford hosted a Fulbright Enrichment Seminar on democracy and human rights. This year, the seminar’s focus was on entrepreneurship and innovation in the new South, featuring speakers from government and the local business community.

Samford President Andrew Westmoreland, Samford Vice President for Marketing and Communication Betsy Holloway, and Alabama State Representative Jack Williams were among those welcoming the group to Brock School of Business.

Jefferson County Commissioner David Carrington presented a plenary session in which he described a region rising above its past social and economic troubles to become a fertile environment for entrepreneurs and investors. The Houston, Texas, native spoke about his introduction to Birmingham and his own journey as an entrepreneur, ranging from creation of the first electronic catalog for Parisian in the 1980s, through the radical changes wrought by the internet, and up to his calling to enter public service at a time of economic turmoil in Jefferson County. “When I look at my adopted home,” Carrington said, “I see beautiful terrain rich with natural resources. I see a giving community that always ranks in the top two or three or four on per capita charitable giving. I see religious leaders who have opened their doors to all. I see civic leaders who think we can do better than we have in the past, and I see a business community that’s open for business.”

The Fulbright participants got to see these things first-hand later in the day with visits to Birmingham Civil Rights Institute, Innovation Depot business incubator and the nationally celebrated Lakeshore Foundation health care facilities adjacent to Samford’s campus in Homewood, Alabama.

Before the group departed for those tours and continued sessions in Huntsville, Alabama, through Dec. 2, they enjoyed panel sessions highlighting entrepreneurial partnerships and women leaders of local businesses.

Samford has a long and distinguished relationship with the Fulbright organization through the many program alumni among its faculty and through its ongoing success in preparing students for the life-changing international experiences offered by the program. The latter initiative, led by Fulbright alumna and Classics professor Shannon Flynt, resulted in Samford’s designation earlier this year as a top national university for Fulbright students.