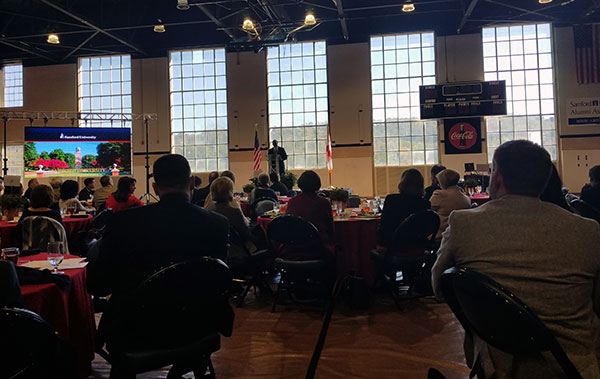 Samford University is uniquely positioned for its national leadership role in higher education, President Andrew Westmoreland told a group of about 250 university leaders and friends at a Leadership Forum Nov. 10.

The forum included representatives of the university’s board of trustees, board of overseers, advisory boards, alumni association and parents association. It was held during Samford’s 2017 homecoming weekend.

Samford is one of a handful of universities “widely recognized for superior quality, large enough to offer a great breadth and depth of academic and student life programs, small enough to nourish rich relationships, and infused with the irrepressible hope found through Jesus Christ,” Westmoreland said.

There are plenty of universities with great records of the first three items, Westmoreland noted, but only a “handful with reasonable claims to all four.”

He cited recent national rankings by Forbes Inc., The Wall Street Journal and The Economist which rank Samford as the top university in Alabama as evidence that Samford is being widely recognized for superior quality.

“I’ve never been pleased with or obsessed with college rankings because I’m not convinced that they truly measure a university,” Westmoreland said. “But, with these the outcomes outweigh in the input. They consider graduation rate, academic success, debt ratio and other factors that measure student success. Based on those outcomes, Samford is the highest ranked university in Alabama.”

Westmoreland also emphasized the importance of relationships. “If you know anything at all about Samford, you know that is what we are and what we do. I have seen it happen so often and so naturally. For it to happen with regularity is extraordinary.”

Macy Spottswood, a graduate student in speech language pathology, said she knew during her graduate school interviews that Samford “was different.

“We talked about how my professors would pray for me and lead me with spiritual guidance during a difficult graduate program,” Spottswood said. “You could tell that there was a genuine care and concern for Samford’s guests that day. This was one of the major reasons that I was truly drawn to Samford.”

She also talked about interprofessional opportunities that she has had to work together with fellow students in nursing, physical therapy and other health care professions, one of the hallmarks of Samford’s College of Health Sciences. “I can now approach other professionals in my clinical placements with a greater degree of confidence as I have an idea of how they can help me with the patients I have the privilege to serve,” she added.

Trenton Fiscus, a senior nursing major, related the story of an experience with his biology professor, Drew Hataway, following the untimely death of his girlfriend’s 17-year-old brother. Fiscus said he had an anatomy test scheduled the next day. Hataway was aware of his situation and told Fiscus, “come back when you feel like you are ready to take this.”

“That speaks volumes to my experience at Samford and the professors we have here,” Fiscus said. “You should be encouraged by the faculty that Samford has.”

Earlier, Westmoreland noted that the university was celebrating the 50th anniversary of full integration when Audrey Lattimore Gaston became the first African-American student. She entered Samford’s Cumberland School of Law in 1967.

“She stepped across an historic barrier that had wrongly existed in our university and in institutions across the south,” he said. “We humbly recognize that African-Americans have been a part of the Samford story from the very beginning. Their labor helped produce the fortunes that founded the institution; they built the buildings, cooked the food and took care of the students and faculty.”

Fifty years ago, African-Americans joined the classrooms for the first time as students, Westmoreland added. Since then, almost 2,000 have earned Samford degrees and have gone on to achieve success in medicine and science, business, ministry, education, the arts and politics.

The forum, first held in 2015, was one of many activities scheduled during Samford’s homecoming weekend.