Published on November 15, 2017 by Olivia Halverson   Share this on: 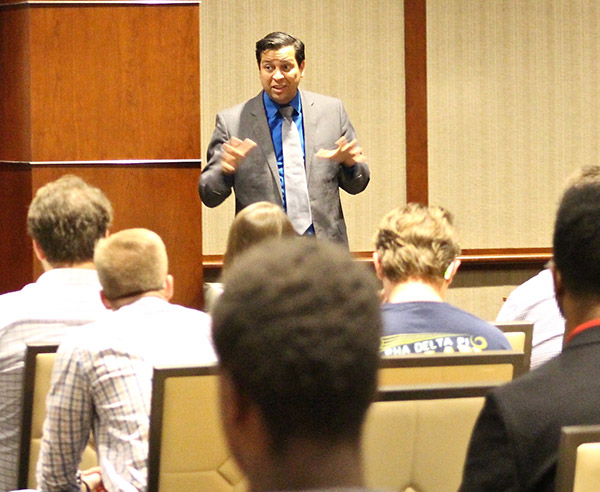 Blankenship’s presentation provided students with a new look at the way to market sporting events. Ironically, when discussing marketing for the team, Blankenship rarely mentioned hockey.

Blankenship’s marketing strategy is to “grow, strengthen and protect the brand.” The Lightning brand, according to Blankenship, is founded on two pillars: culture and community.

In order to grow, strengthen and protect that culture and community, Blankenship and the marketing team have strategically chosen to put all of their investments into the fan experience.

After becoming owner of the team in 2011, Jeffrey Vinick invested millions of dollars in renovation efforts for an arena that would seat more than 19,000 hockey fans and would include the biggest, best scoreboard. Today the Amalie Arena, home of The Tampa Bay Lightning, ranks among the highest attended arenas for National Hockey League games.

“I firmly believe that there are only two types of people in Tampa Bay,” Blankenship said. “There’s a Lightning fan, and then there’s someone who’s never been to a game. I believe if I can get someone to a game, they will be a Lightning fan because of the fan experience.”

In addition to facility investments, the marketing team has also focused heavily on building culture and community outside of the arena. They have invested in public rinks throughout the community to promote hockey culture at a grassroots level to kids and people that never thought they would play hockey.

With the help of investors and marketing professionals like Blankenship, The Tampa Bay Lightning hockey team has successfully developed a brand that goes beyond the sport of hockey and impacts an entire community.

Blankenship encouraged students to use their future marketing positions to do more than sell a team or a product, and to think bigger. Blankenship explained that in meetings, he and the marketing team are constantly asking themselves, “What can we do better? What are we missing? Who needs our help?”

Blankenship’s presentation provided a great opportunity for students to gain both exclusive insight into the sports marketing industry and a profound perspective on innovative sports marketing that focuses more on the people than the product.

Olivia Halverson is a journalism and mass communication major and a news and feature writer for the Division of Marketing and Communication.