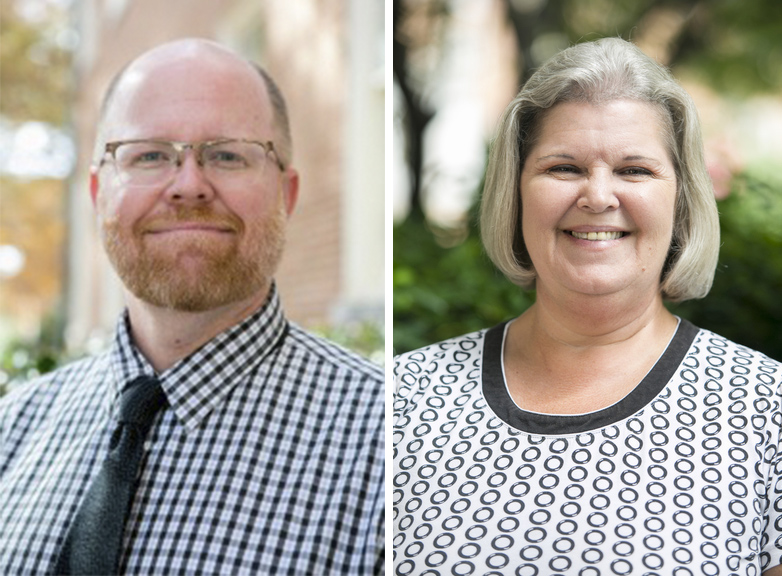 The awards are part of the SoCon Academic exchange, a collaborative effort by the conference's chief academic officers to promote cooperation among the membership to benefit all students–-not just athletes.

“It feels great to know that SoCon recognizes hard work both on and off the athletic field, and among everyone at the university,” Davis said of the honor.

Martin said her association with Samford athletics began when her brother, John Howard “Monty” Montgomery, played for the university’s newly-revived football team in the 1980s. When Martin joined Samford’s staff, she found that faculty and staff have an important role to play in supporting athletes like her brother.

“I feel like God placed me here for a reason,” Martin said. She has had close relationships with many student-athletes over the years, listened to their troubles and helped them manage the special demands of their time. “We see the other side of what they go through, the struggles, because they do have so much they have to do—the practices, the games, the travel. We’re in the back field, helping them do whatever they want to do with the rest of their lives.”

Senior Associate Provost Tom Woolley said Davis and Martin “epitomize the qualities of demonstrated service to the institution and ongoing contributions to campus life that the Southern Conference wishes to recognize.” “Both bring out the best in those around them while continually creating conditions for success."
Samford is a leading Christian university offering undergraduate programs grounded in the liberal arts with an array of nationally recognized graduate and professional schools. Founded in 1841, Samford is the 87th-oldest institution of higher learning in the United States. The Wall Street Journal ranks Samford 1st nationally for student engagement and U.S. News & World Report ranks Samford 66th in the nation for best undergraduate teaching and 104th nationally for best value. Samford enrolls 5,683 students from 47 states and 19 countries in its 10 academic schools: arts, arts and sciences, business, divinity, education, health professions, law, nursing, pharmacy and public health. Samford fields 17 athletic teams that compete in the tradition-rich Southern Conference, and ranks 6th nationally for its Graduation Success Rate among all NCAA Division I schools.
Director of Communication
Holly Gainer
Hgainer1@samford.edu
912-344-8443