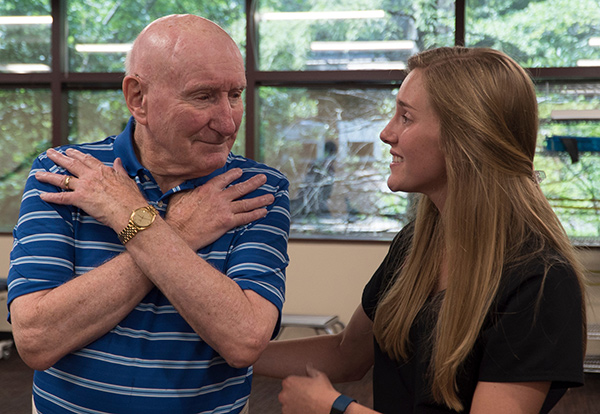 In Samford University’s School of Health Professions, students are empowered with confidence, compassion and knowledge by the school’s commitment to exposing them to a variety of population-based specialties.

This summer, Samford’s Department of Physical Therapy partnered with Danberry at Inverness, a retirement community near Samford’s campus, for a project that was initiated by one of Danberry’s residents.

Earlier this spring, associate professor Scott Bickel met with Hank Boger, a resident, and Cleo Clency, a staff member from Danberry. Boger, a man in his 90s, had started his own research project, using a piece of equipment to try to predict a person’s need for a walker, wheelchair or cane.

“In hearing about his research and how they wanted to continue, I thought, this is great. This is definitely something we want our students to experience,” Bickel said. “I explained to Mr. Boger that physical therapists can measure the same parameters that his equipment could by simply conducting certain tests.”

So the project began. Bickel and assistant professor Sarah Ross took the 2018 Doctor of Physical Therapy cohort, then taking a geriatrics course, to Danberry to conduct physical performance assessments in coordination with a wellness program organized by Danberry.

“We tested residents at the beginning and end of a wellness program, one that encouraged them to track their steps using a pedometer,” said Robyn Newberry, a third year physical therapy student. “There was about a month of time in between our pre- and post-assessments.”

“The volunteers came in and we had an intake station to collect information like the person’s name and normal vital signs,” said Laura Johnson, a third year physical therapy student. “Then we worked with each person through a series of five to six testing stations.”

The majority of these tests were used to determine a fall risk prediction. A “six-minute walk” tested a person’s endurance, and a “timed up-and-go” worked to evaluate one’s balance. While no single test can determine a person’s risk of falling, cumulatively, students are able to provide a prediction based on the overall results.

“Our students were meeting a need because residents don’t often see a physical therapist until something goes wrong,” Bickel said. “Instead, their work focused on prevention and health promotion.”

This project gave students hands-on experience with older individuals, conducting tests similar to ones they might see in a clinical setting.

“Long term, we would like to do projects like this regularly. It provides good experience for the students, and it’s good for the volunteers. Plus, it would be great to go back next year and see how these same people have improved or declined,” Bickel said.

For some students, the experience confirmed their calling to work with the aging generation.

“I was always close to my grandparents, and watching them go through physical therapy inspired me to pursue this career,” Newberry said. “Every population we work with is interesting, but this project has confirmed that I want to work with geriatric populations.”