Published on December 13, 2017 by William Nunnelley   Share this on: 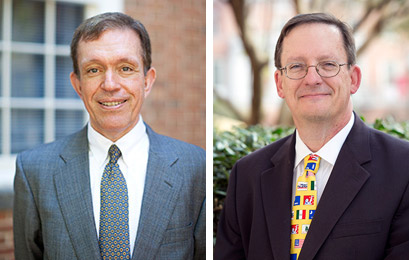 Two academic chairs were approved by the Samford University Board of Trustees for the Cumberland School of Law Dec. 5: the Albert P. Brewer Chair of Ethics and Professionalism and the Stephen Everett Wells Chair in Municipal Law.

The Brewer chair is established in memory of the late Alabama governor and Samford trustee, Albert P. Brewer. It was originally established by Brewer with a $500,000 gift in 2013, and recently completed with a $1 million provision from Brewer’s estate. The Brewer chair is to be held by a scholar who has exhibited excellent teaching and research abilities along with worthy ethics and professionalism.

"Governor Brewer was one of the greatest leaders and public servants in Alabama in the last hundred years," said Cumberland Dean Henry "Corky" Strickland. "He was also an extraordinary lawyer. Beyond those roles, he was a model of professionalism, civility, and ethics.  He humbly exhibited those traits in his roles in government and to a generation of law students. There thus could not be a more fitting tribute to Governor Brewer than a law school chair in ethics and professionalism to continue his legacy."

The Stephen Everett Wells Chair in Municipal Law was created by The Alabama Municipal Insurance Corporation (AMIC). AMIC provides insurance for its several hundred members, which consist of municipalities and similar governmental entities across Alabama. Municipalities are the "boots on the ground" in American government that provide the vast majority of the essential services that citizens expect from government.  In light of that important reality, AMIC provided a gift of $1,050,000 to establish the chair to assure that future lawyers are educated about municipal law and the issues that affect municipalities and that those issues receive sound scholarly research to enhance municipalities’ service to their citizens.

"I am excited for Cumberland to be a part of that effort and look forward to future opportunities to partner with AMIC and Alabama municipalities to serve the citizens of Alabama," said Strickland.

Steve Wells, president of AMIC, added, "I’ve been in this business for 30 years and we have always had issues with attorneys, local  judges and Supreme Court judges who do not understand municipal law. AMIC’s board of directors ultimately came to the conclusion that the best way to overcome the problem was through education – a funded law school chair dedicated specifically to municipal and public entity law. Cumberland was the right fit for this unique initiative. It’s something I’m very proud to have been involved with because this endeavor will have long-term, positive affects for many years."

Ross has taught at Cumberland since 1988. His courses have included professional responsibilities, civil procedure, constitutional law and American legal history. Ross is a nationally recognized expert on the ethics of legal fees, and judicial ethics. He is also a specialist on American constitutional history and his most recent book, World War I and the American Constitution, was published this year by Cambridge University Press. He has also written five other books and numerous articles and book reviews on American legal history.

DeBow has also taught at Cumberland since 1988. His teaching and research interests include property, business organizations, administrative law, legislation and local government. DeBow’s career includes a stint in private practice in Washington, D. C., followed by a judicial clerkship with Judge Kenneth Starr of the U.S. Court of Appeals for the D.C. Circuit and service as an attorney-adviser to Federal Trade Commission chairman James Miller. He served during 2000-2004 as a part-time special assistant for legal policy to Alabama attorney general Bill Pryor. He is the author of numerous articles in law journals.