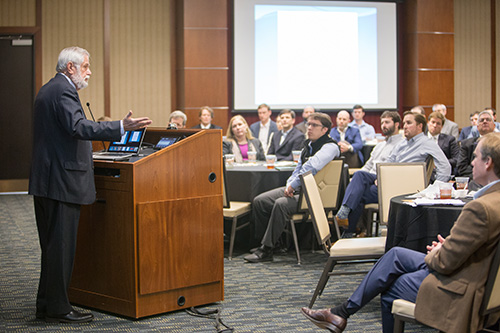 Ethics speaker Aaron Beam quickly rose to the top of the business world only to find himself in a steep downward slope, caught in the middle of one of the largest corporate accounting frauds in recent history.

CFA Society members and current students gathered to learn about the downfall of one of Alabama’s largest companies. The slippery slope that Aaron described in his speech titled “Frauds, Lies, and Hermes Ties” focused on the poor ethical nature of the company that he helped build and eventually have it become a Fortune 500 Company.

Greed got the best of Richard Scrushy, Beam himself and many others that were involved in the fraudulent accounting reports that were published time and time again. Reporting bad numbers over the course of several years led to Beam’s own depression and his eventual retirement in 1997.

Six years later, and after pursuits by Scrushy for Beam to return to work, national news headlines in Spring 2003 read along the lines of “Massive Accounting Fraud at HealthSouth,” and Beam knew he was in trouble.

He hired an attorney, pled guilty, lost nearly all of the fortune he had and spent three months in federal prison at Maxwell Air Force Base in Montgomery, Alabama.

Beam now speaks at universities and to students across the country about his poor ethical decisions in an effort to make them aware of what could take place if greed gets the best of you. He tells students that it takes courage to stand up and do the right thing.

“When it comes to ethics, you need to try to be perfect,” he said.

In response, Assistant Professor of Finance and event organizer Rusty Yerkes added: “The first-hand account of the HealthSouth story was fascinating. The main message I heard was any ethical breach, however small, is unacceptable when others have placed their trust in you. You are held to higher standard of care when you are in a position of responsibility that affects many stakeholders. Mr. Beam’s story serves as a good example and reminder of the importance of ethics when many are depending on the actions of a few.”

Brock School of Business hosts events of this nature and partners with external organizations for our students to be able to receive the best experiential education possible.

"Experience is the greatest teacher, and we all benefit from other people's experience,” said Dean Howard Finch. “Our students and programs are strengthened by the willingness of professionals such as Mr. Beam to share their own experiences, both good and bad."

Yerkes added: “I think it’s important to connect theory with practice and having industry professionals in for networking and guest lectures ensures we are connected with the business community and keeping pace with a dynamically evolving business world.”

Beam is the author of HealthSouth: The Wagon to Disaster and Ethics Playbook: Winning Ethically in Business and welcomes your request for a first-hand lesson on ethical business practice. Go to aaronbeam.net for more information about Beam and his experience.