Published on January 23, 2018 by William Nunnelley   Share this on: 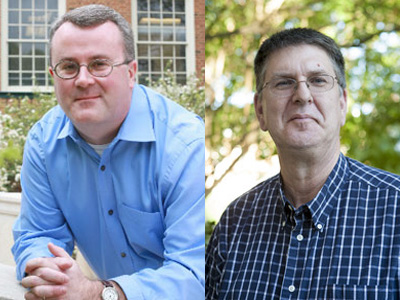 Samford University presented two of its top awards to teachers during opening convocation for the spring term Jan. 23. Bryan Johnson, director of the University Fellows program and a professor of English, received the George Macon Memorial Award. Roger Lander, a professor in McWhorter School of Pharmacy, was presented the Jennings B. Marshall Award.

Johnson, at Samford since 1995, is a specialist in creative writing (poetry) and literary theory. He has also taught courses in 20th century poetry, film, comparative literature and the philosophy and literature of science. He is an active scholar-poet, and his work has appeared in the Paris Review, Denver Quarterly, Western Humanities Review, American Letters and Commentary, Free Verse, Thicket and New American Writing.

Johnson has taught Writing and Rhetoric and Western Intellectual Tradition for the University Fellows program.

The George Macon Memorial Award goes annually to a faculty member who through outstanding performance as a teacher, counselor and friend demonstrates the ability to inspire students to greatness. The award honors an 1884 graduate who later joined the faculty to teach chemistry, natural history, applied mathematics and engineering.

Lander, at Samford since 1986, has helped to expand the international involvement of the pharmacy school, including student rotations in the United Kingdom, Indonesia and Vietnam as well as offering study-training opportunities at Samford for foreign pharmacists. He joined Samford to develop a research program in pharmacy and worked within the schools in the Pharmacokinetics Center for three years.

The Jennings B. Marshall Award goes to a faculty member who has made significant and sustained service contributions at Samford. The contributions of this faculty member are evidenced by substantial time commitments and significant accomplishments related to service activities, along with providing exemplary leadership. The award honors the longtime business professor for whom it is named.