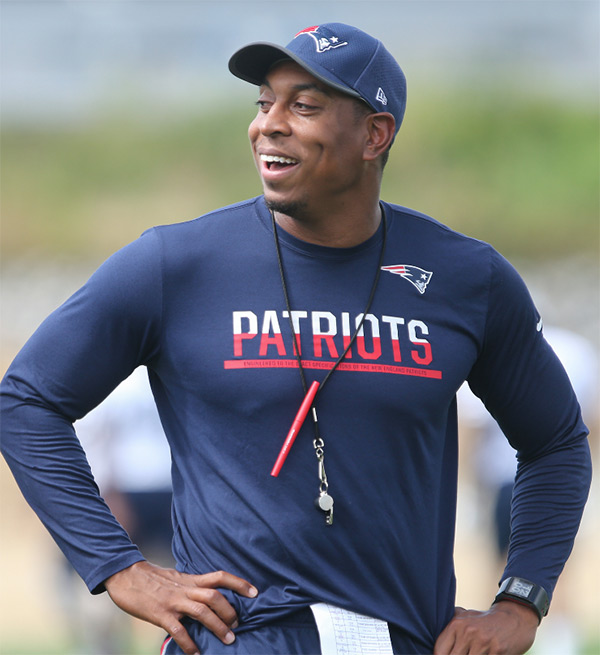 When the New England Patriots take the field for yet another Super Bowl Sunday, former Samford University wide receiver DeMarcus Covington will be on the sideline as a member of the team’s coaching staff.

“First of all, it was all God,” Covington said of his coming into contact with the organization that would eventually hire him. “I was fortunate that we had a player at Eastern Illinois that the Patriots were looking at and they actually drafted him in the sixth round. And I got the opportunity to meet the linebackers coach when he came to work out the kid at Eastern Illinois.”

Covington left Eastern Illinois after one season and accepted a position on the staff at Chattanooga. During his brief time with the Mocs, Covington had another encounter with the Patriots, this time involving the team’s head coach.

“I stayed in contact with them throughout the year,” Covington said. “Then when I moved to Chattanooga, we had another player that the Patriots were also looking at, Keionta Davis, who is with us now. Then Bill Belichick came down to Chattanooga and I met with Bill and we had a good talk and worked out the kid down there. And then a couple of weeks later, he called me up there for an interview.”

During his first season with the Patriots this year, Covington helped the team to a 13-3 regular-season record. The Patriots then defeated the Tennessee Titans and Jacksonville Jaguars in the NFL Playoffs to advance to Sunday’s Super Bowl. Covington said the preparation this week has been the same as it has been each week of the season.

Covington said he has learned a lot from the veteran coaching staff of the Patriots during his time with the team.

“The main thing has really just been being able to coach up our players,” Covington said. “Bill is a really great teacher. He does a great job with our players in teaching them situational football. He’s great at making sure we’re on everything about how we coach, about how our players look at the opponents.

“I’ve learned a lot from Bill and our coaching staff,” Covington said. “They’re all great men and they’ve been in the NFL a long time, so they know how to put people in the right position for them to be successful. That is one of the biggest things I’ve learned is just how he takes the organization and puts everybody in the right position to be successful.”

Covington came to Samford in 2007 out of Birmingham’s John Carroll Catholic High School. He was a member of former head coach Pat Sullivan’s first recruiting class. Sullivan said he saw some qualities in Covington back then that would make him a successful coach.

“The first thing you notice about DeMarcus is that he is a good person,” Sullivan said. “That is where it all starts, wherever you are, it starts with being a good person. I remember seeing him play basketball at John Carroll and you could tell he was the leader of the group. Whenever there was a critical situation, he wanted the ball in his hands.”

Sullivan said he saw him grow as a leader during his time at Samford.

“You could see his leadership ability when we would have younger players come in and he would always work with them to make them better,” Sullivan said. “You could see he was going to be a good coach. All of us at Samford are extremely proud of DeMarcus.”

As a three-year starter at wide receiver Covington caught 62 passes for 586 yards and two touchdowns from 2007-10. Covington said he learned a lot about preparation during his time in a Samford uniform.

“I learned about the week-in and week-out preparation,” Covington said. “At Samford they try to teach you to prepare weekly for the opponent. And that’s really the same way we preach in coaching, trying to get our players to prepare week-in and week-out for each opponent. Because every opponent isn’t the same. So, you have to approach each week differently and learn the ins and outs of preparing for each opponent for what they are capable of doing. Coach Sullivan did a good job of making sure that we were prepared and that we knew our opponents and that’s one of the things I learned. Going into coaching you have to understand, watch film, get to know your opponent the best you can so you can go out there and play fast.”

In just a few short years, Covington has gained a lot of valuable experience in the coaching profession. He has already reached the level of a defensive coordinator of a college team, and now he is on the staff of a team playing in Sunday’s Super Bowl. His future in coaching is bright, and he has already made everyone involved with Samford University extremely proud.