Published on January 31, 2018 by William Nunnelley   Share this on: 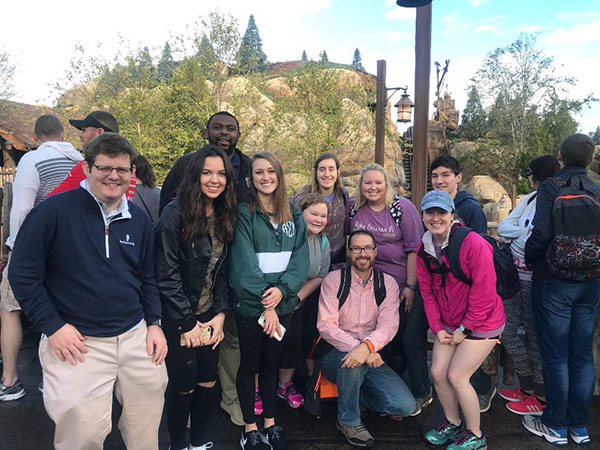 A Samford University sociology class took a trip to Disney World during the 2018 Jan term. Most of the class members had been before, but this time they looked at it from a different perspective. While they did enjoy the rides and events, they spent a good part of the time studying the reactions of others to the park.

Sociology was the focus of this trip. How do Disney guests react to the situations they encounter?  How much do guest-to-guest and guest-to-employee interactions contribute to the result? What does Disney do to create interaction among guests?

Sociology professor Chuck Stokes put the course together several years ago because he noticed  this generation of students seemed more influenced by Disney than previous groups. This was the third time he had taught the class.

“Before the class, students learned and were tested on social scientific principles that would prepare them for conducting observational research in the parks,” he said. “They also composed a paper about the history and impact of the Disney Corporation.”

Stokes lectured on sociology principles related to their Disney experience during mornings and sent students out to observe and interview Disney guests and cast members during afternoons. He stressed that they should “be curious and courteous.” After a week onsite, the class returned to complete an exam and submit a research paper.

Lilly Welch, a sophomore psychology major from Austin, Texas, said she had been to Disney World many times but had never paid much attention to what others were doing during previous visits. This time, she said, “it was very insightful to intentionally watch the interactions between different people.”

One example came as the result of the way Disney provided online trivia games for guests to play while they are waiting in line for rides. “Disney purposefully creates situations where guests have to interact with one another,” said Welch.

“Since sociology looks at the interaction between people in certain social situations, this game was particularly interesting to examine. It caused guests to interact with one another when usually they would not say anything to each other.

“Disney’s main goal is to make sure that their guests are having positive experiences,” said Welch. “By allowing guests to interact and communicate with one another, Disney created fun memories and engaging activities allowing guests to remain in a positive mindset.”

Welch called the course “extremely valuable,” adding “Every day we learned and experienced something different.”

While the sociology students headed to Disney, Samford musical theatre students traveled to New York City in early January for two full days of master classes with industry professionals. “The students sang and danced for these professionals and got wonderful feedback and much growth was seen over just two days,” said School of the Arts faculty member Chelsea Nicholson, who led the tour.

“What’s great about this trip is students have an open schedule outside the intensive so they were able to soak up shows in the evenings and some stayed additional days to get coaching and take dance classes,” she said.

“In addition, the students met Samford theatre alumni in the area at an informal ‘meet and greet,’” said Nicholson. “The students made great connections with students of the past.”

Biology students enrolled in the course, Biological and Environmental Perspectives in Community Health, traveled to Perry County, Alabama, for a course centered around the issues of water delivery, cleanliness and contamination. Biological and environmental studies professor Betsy Dobbins led the course. In addition to dealing with water issues, the class helped paint a new facility at Project Horseshoe Farm, a community-based service organization in Greensboro, Alabama.